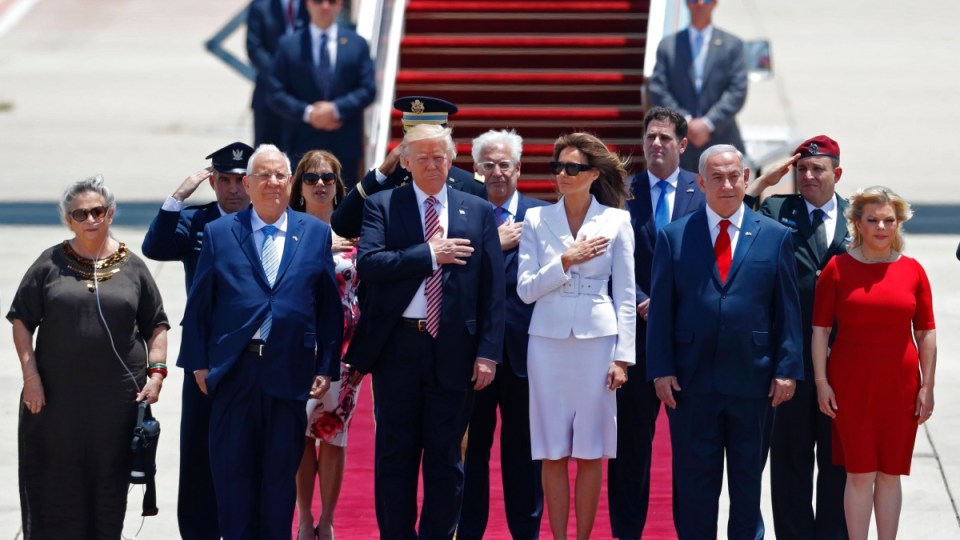 US President Donald Trump’s visit to the Middle East has the world watching in fascination with the President battling a growing list scandals at home in the US.

While domestic controversy swirls around him, diplomats, officials, the US public and interested observers elsewhere in the world are watching his public appearances in the politically volatile region in expectation of a major gaffe or unscripted moment.

Happily so far, Mr Trump has not strayed from official lines, but a moment with wife, Melania, after his arrival in Israel at Tel Aviv’s Ben Gurion International Airport has caught the attention of eagle-eyed observers.

Walking a red carpet alongside Israeli Prime Minister Benjamin Netanyahu and his wife, Sara Netanyahu, Mr Trump reaches his hand back towards his wife, who brusquely, but deftly, slaps it away.

The Israeli leader and his wife are walking hand-in-hand.

At the official function which followed, Mr Trump said that shared concern about Iran was driving Israel and many Arab states closer and demanded that Tehran immediately cease military and financial backing of “terrorists and militias”.

In stressing threats from Iran, Mr Trump echoed a theme laid out during weekend meetings in Saudi Arabia with Muslim leaders from around the world, many wary of the Islamic Republic’s growing regional influence and financial muscle.

Mr Trump has vowed to do whatever necessary to broker peace between Israel and the Palestinians, dubbing a peace accord “the ultimate deal”.

But ahead of his visit to the Holy Land, he gave little indication of how he could revive talks that collapsed in 2014.