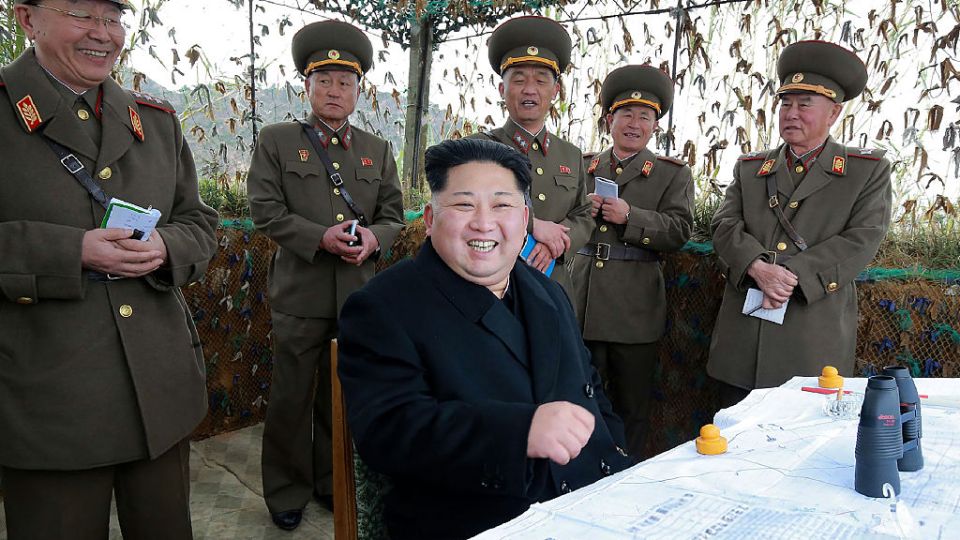 President Donald Trump says North Korea’s leader is “a pretty smart cookie” for being able to hold onto power after taking over at a young age.

In a taped interview broadcast Sunday on CBS’ Face the Nation, the President offered praise for Kim Jong-Un’s political resilience, if not his sanity.

The US President said despite North Korea’s latest failed rocket launch Pyongyang will eventually develop better missiles, and “we can’t allow it to happen”.’

Declining to discuss the possibility of military action, Mr Trump described the world’s diplomacy with North Korea as “a chess game”

“I just don’t want people to know what my thinking is,” he said.

General McMaster said North Korea poses “a grave threat”, not just to the US and its Asian allies, but also to China.

Speaking on Fox News, McMaster said it is important “for all of us to confront this regime, this regime that is pursuing the weaponisation of a missile with a nuclear weapon”.

“This is something that we know we cannot tolerate,” McMaster said.

On Saturday, a North Korean mid-range ballistic missile broke up a few minutes after launch, the third test-fire misfire this month.

The North’s repeated failures over the past few years have given rise to suspicions of US sabotage.

In the CBS interview, the president was asked why the North’s rockets keep blowing up.

“I’d rather not discuss it,” he said. “But perhaps they’re just not very good missiles. But eventually, he’ll have good missiles.”

He added: “And if that happens, we can’t allow it to happen.”

North Korean ballistic missile tests are banned by the United Nations because they are seen as part of the North’s push for a nuclear-tipped weapon that can hit the US mainland.

General McMaster said that Trump “has made clear that he is going to resolve this issue one way or the other,” but that the President’s preference is to work with China and others to resolve it without military action, such as through sanctions.

Mr Trump said he believes China’s president, Xi Jinping, has been putting pressure on North Korea over its missile and nuclear weapons programs.

The President is set to speak with leaders of Singapore and Thailand about the threat North Korea poses of massive, nuclear destruction in Asia, White House Chief of Staff Reince Priebus said.

“We need cooperation at some level with as many partners in the area as we can get to make sure that we have our ducks in a row,” Mr Priebus told ABC’s This Week, ahead of the Sunday calls.

Trump spoke to Philippines President Rodrigo Duterte on Saturday about North Korea and his outreach to regional leaders aims to get “everyone in line backing up a plan of action” if the situation in North Korea deteriorates, Mr Priebus said.