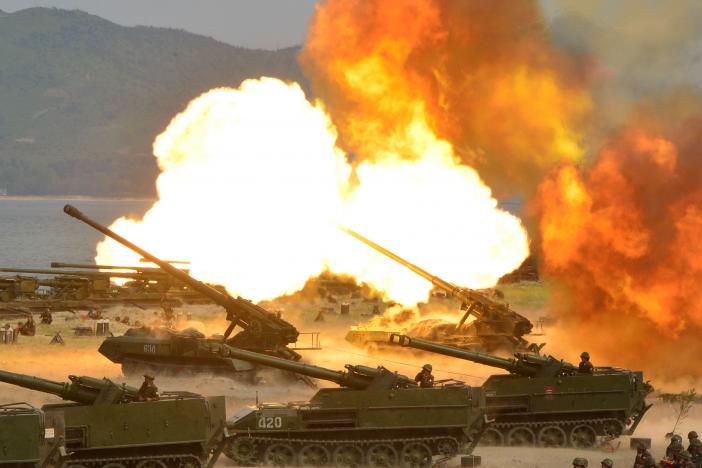 North Korea marked the 85th anniversary of its military with an artillery drill. Photo: KCNA

North Korea has never been shy about its military might. But as images emerge of its “largest ever” artillery drill – and with the world bracing for conflict on the Korean Peninsula – the regime’s true military potency has become a more pressing question.

The images and video, broadcast by North Korean state media this week, show hundreds of “large-calibre” self-propelled guns, lined up along a beach, firing in unison, low-flying jets dropping bombs and submarines firing torpedoes as Kim Jong-un looks on.

Held to mark the 85th anniversary of the Korean People’s Army’s foundation, the demonstration near the eastern port city of Wonsan comes as the US on Thursday flagged it would impose even tougher sanctions on the Kim regime.

“It was very impressive,” Professor Joseph Siracusa, a leading security and nuclear weapons expert, said of the North Korean display. “It reminds people that these pieces of artillery and tanks actually work.”

After taking office five years ago, Mr Kim has stepped up the country’s military capabilities, already at 25 per cent of GDP between 2002 and 2012.

His focus on developing nuclear weapons has fuelled tensions in the region, prompting the US and South Korea to develop a nuclear defence system in a bid to protect Seoul from a future attack.

As President Donald Trump briefed US Senators on the North Korea problem, US officials hoped a tougher diplomatic stance could pay dividends.

“We want to bring Kim Jong-Un to his senses, not to his knees,” US Navy Admiral Harry Harris said.

Regardless, a barrage of threats towards the US and South Korea – and recently Australia – have brought the reality of North Korea’s military might into focus.

How does North Korea stack up?

According to Global Firepower, which analyses the military capabilities of different countries, Kim Jong-un has 700,000 frontline personnel at his disposal, with 4.5 million in active reserve.

It ranked North Korea’s overall military strength at No.23 in its power ranking, one place below Australia (22nd), also behind South Korea (11th).

While that paled in comparison to the United States (1st), Russia (2nd) and China (3rd), Professor Siracusa said North Korea should not be underestimated.

“They have about 10,000 pieces of artillery aimed at Seoul,” he told The New Daily. “These can fire repeatedly, they are conventional warheads, and some of them may have nerve gas.”

“US intelligence experts believe some of those already carry operational nuclear arms,” Professor Siracusa said. “They have a range of 800 miles. The submarine can just prowl in the dark and take a good shot at people.”

“They have the ability to hit Japan, South Korea and anybody else in the region.”

While it is estimated the regime already has 15 to 30 nuclear warheads, it would face serious difficulties if a conventional war broke out.

This week, North Korean state media took a veiled swipe at China over an acute fuel shortage, as Beijing seeks to exert pressure on the Kim regime by halting exports.

According to Professor Siracusa, that would prove a key weakness during any major conflict.

“They would also have trouble with spare parts and ammunition,” he said. “You need oil and you need parts to run a war, otherwise you only get one shot at the enemy.”

And there are other weaknesses. The cash-strapped nation relies on the black economy to finance its military while its reserve personnel, though substantial in number, are largely untested.

“We don’t know what the loyalty is beyond the shock troops they have,” Professor Siracusa said.

“They have money for conventional weapons, and a nuclear program and a rocket program, but they don’t have money to fight a sustained war. So this war would be over in five days.”