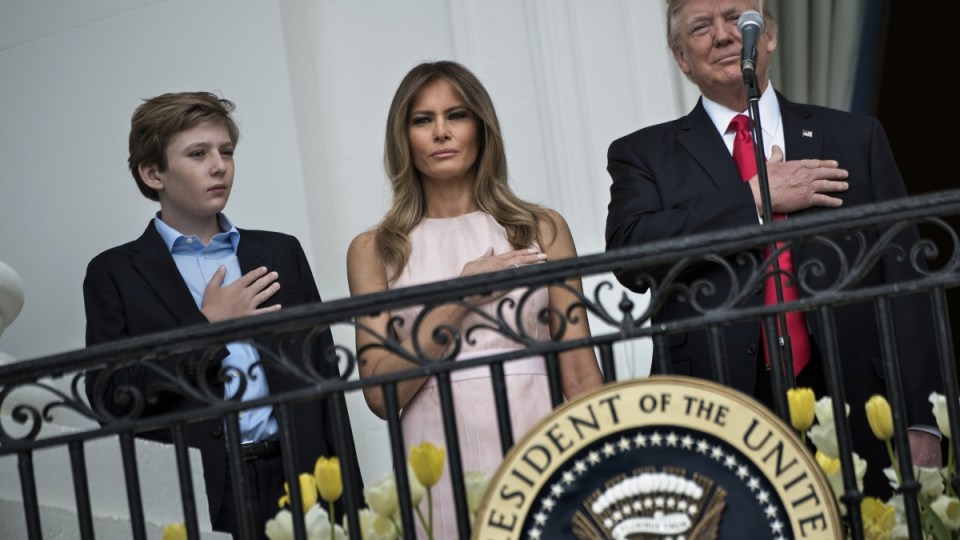 During a rendition of the US national anthem, Mrs Trump was spotted subtly nudging President Donald Trump after he failed to place his hand on his heart – an expected practice during The Star Spangled Banner.

Mr and Mrs Trump were joined on the balcony of the White House on Monday (local time) by son Barron, 11, Gunnery Sergeant Sara Sheffield and the Easter Bunny.

While both Mrs Trump and Barron remembered to pay their respects by placing their hands on their hearts, Mr Trump needed a gentle reminder – something spotted by keen-eyed journalists attending the ceremony.

That's a subtle nudge from Melania to remind Trump to lift his hand during the national anthem… https://t.co/P9XlYpjvcQ

Not placing the hand on the heart during the anthem or the pledge of allegiance is often interpreted as a sign of disrespect or protest in the US.

US gymnast Gabby Douglas was slammed for accidentally failing to put her hand on her heart during the anthem at last year’s Rio Olympics.

Former president Barack Obama was also accused of being unpatriotic after a 2007 photo emerged showing him standing with two arms by his side during the national anthem.

While Mrs Trump helped the President avert disaster, she was unfortunately not able to save him from another awkward moment on the same day.

As Mr Trump greeted waiting crowds at the White House, one young supporter asked him to sign his ‘Make America Great Again’ hat.

Mr Trump obliged, but after signing the hat he absentmindedly threw it out into the crowd, far from its owner, to cries of ‘No!’.

A kid asks Trump to sign his hat at the White House Easter Egg Roll. The president signs … and then tosses the hat into the crowd. pic.twitter.com/7ExdhpO97H