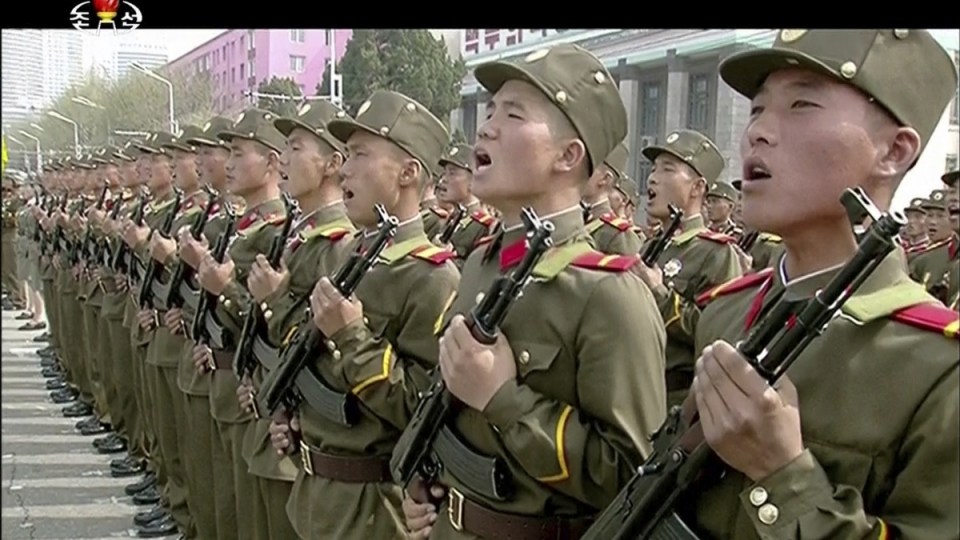 If the US believes North Korea is “looking for trouble”, as US President Donald Trump said in a recent tweet, then Kim Jong-un will give him all the trouble he wants, a senior foreign ministry official in Pyongyang has promised.

But the comments were followed by an embarrassing military failure.

North Korea’s bid to thumb its nose at the US blew in its face with the explosion of a suspected long-range missile just seconds after it left the launch site.

Observers of the escalating crisis on the Korean Peninsula had anticipated another test, seeing it as a gesture of defiance by North Korean leader Kim Jong-un as a US naval battle group led by the mega-carrier USS Carl Vinson prepares to take up station off the coast.

South Korean sources believe the a missile was launched the town of near Sinpo, on North Korea’s east coast. (Read the full story here.)

Earlier, Vice-Foreign Minister Han Song-ryol told Associated Press “We will go to war”. The official was speaking in the North Korean capital, where the regime staged a defiant parade of military might, including long-range submarine-based missiles, through the capital’s central square on Saturday, the 105th anniversary of the birth of its founding father, Kim Il Sung.

His comments come as a nuclear-armed US naval battle group, centred on the nuclear-armed USS Carl Vinson mega-carrier, prepares to take up station off the Korean Peninsula and the US and South Korea stage their largest-ever war games.

North Korean leader Kim Jong-un, Kim Il Sung’s grandson, looked relaxed in a dark suit and laughing with aides as he oversaw the huge parade on the “Day of the Sun” at Pyongyang’s main Kim Il Sung Square.

Goose-stepping soldiers and marching bands filled the square, next to the Taedonggang River that flows through Pyongyang, in the hazy spring sunshine, followed by tanks, multiple launch rocket systems and other weapons.

China, the third party in what is becoming by the day an ever-more complicated diplomatic and military tangle, repeated its call for both sides to de-escalate tensions and agree to talks aimed at “de-nuclearising” the entire Korean Peninsula.

China has been urged by Mr Trump and other senior US officials to take a greater role in pressuring the North Korean regime to renounce provocative tests of long-range missiles it has claimed can now strike the US west coast.

Beijing has given mixed signals, as of Saturday saying it is suspending all Air China flights to Pyongyang, state broadcaster CCTV announced. The airline subsequently issued a “clarification” noting that only “some” flights had been cancelled.

That latest sanction came on the heels of moves in February that saw China refuse to accept further shipments of North Korean coal – a move explicitly intended to pressure Pyongyang by denying the impoverished nation the foreign currency it desperately needs.

At the same time China also reiterated its call for peace talks.

“Once a war really happens, the result will be nothing but multiple loss,” warned Beijing’s Foreign Minister Wang Yi. “No one can become a winner.”

North Korea is looking for trouble. If China decides to help, that would be great. If not, we will solve the problem without them! U.S.A.

That plea fell on deaf ears in North Korea.

“We’re prepared to respond to an all-out war with an all-out war, and we are ready to hit back with nuclear attacks of our own style against any nuclear attacks,” the country’s No.2 official, Choe Ryong-Hae, said in a speech at a ceremony that preceded the large military parade broadcast live by the North’s Korean Central TV.

Weapons analysts said they believed some of the missiles on display at the military parade were new types of intercontinental ballistic missiles (ICBM).

It suggests Pyongyang has been working towards a “new concept” of ICBM, said Melissa Hanham, a senior research associate at the US-based Middlebury Institute of International Studies at Monterey, California.

Displaying more than one of the missiles indicates North Korea is progressing with its plan to base a missile on a submarine, which are hard to detect, said Joshua Pollack, editor of the Washington-based Nonproliferation Review.

In a further indication of how the antagonists’ rhetoric might easily lead to armed conflict, Japan has announced contingency plans to evacuate its nationals from South Korea in the event that the current war of words becomes a full-scale shooting match.

Back in Washington, Pentagon and administration officials have cited satellite surveillance images they say are firm indications North Korea is poised to test another nuclear device, and possibly a missile as well.