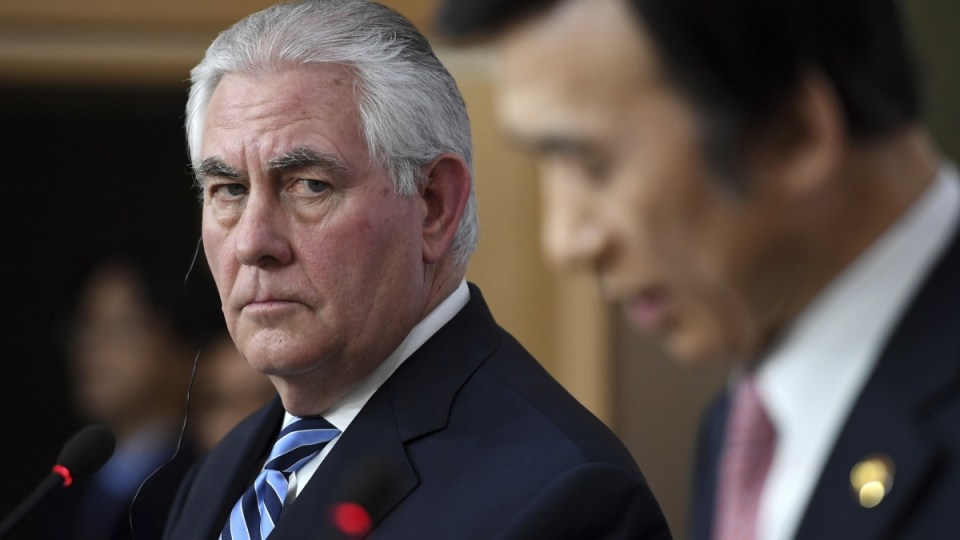 US Secretary of State Rex Tillerson during a media conference in Seoul last week. Photo: AAP

The US is rededicating itself to hold to account “any and all” who commit crimes against innocent people, US Secretary of State Rex Tillerson says, days after the US military unexpectedly attacked Syria.

Tillerson is in Italy for a meeting of foreign ministers from the Group of Seven (G7) major industrialised nations, with his counterparts from Europe and Japan eager for clarity from Washington on numerous diplomatic issues, especially Syria.

Before the April 7 missile strikes on a Syrian air base, US President Donald Trump had indicated he would be less interventionist than his predecessors and willing to overlook human rights abuses if it was in US interests.

But Tillerson said the US would not let such crimes go unchallenged.

“We rededicate ourselves to holding to account any and all who commit crimes against the innocents anywhere in the world,” he told reporters while commemorating a 1944 German Nazi massacre in Sant’Anna di Stazzema.

Trump ordered his military to strike Syria in retaliation for what the US said was a chemical weapons attack by President Bashar al-Assad’s forces, which killed scores of civilians, including many children.

European ministers are eager to hear whether Washington is now committed to overthrowing Assad, who is backed by Russia.

Tillerson, who travels to Russia after the two-day G7 gathering, said at the weekend the defeat of Islamic State remained the US priority, while the US ambassador to the United Nations, Nikki Haley, said “regime change” in Syria was also a priority for Trump.

The mixed messages have confused and frustrated European allies, who are eager for full US support for a political solution based on a transfer of power in Damascus.

Tillerson plans to meet on Monday with foreign ministers from the UK and France.

‘We’ll defend innocents’ wherever they are: Tillerson