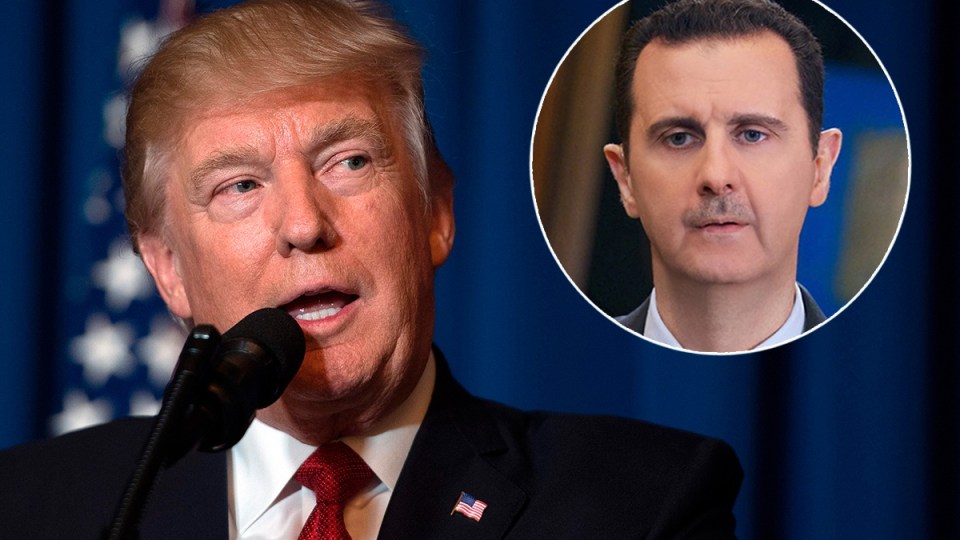 It has also led to promises of counter attacks.

Tensions continued to escalate early on Monday (AEST) after Syria and its allies hit back in a statement from a joint command centre comprising forces of Russia, Iran and Syria.

Citing Barack Obama’s “red line”, the three nations warned the West that any further bombings or aggression against Syrian targets would be met “with force”.

“What America waged in an aggression on Syria is a crossing of red lines,” the group said in a statement published on media outlet Ilam al Harbi (War Media).

Over the weekend, US warships, including the supercarrier USS Carl Vinson and several guided-missile destroyers, were diverted from a planned visit to Australia to Korean waters to safeguard American interests from a “reckless, irresponsible and destabilising” North Korea, said a US fleet commander.

This followed North Korea joining the international response to the bombings. The reclusive nation said that Mr Trump’s attack on a Syrian airfield was “unforgivable aggression” and the attack justified its decision to develop nuclear weapons “a million times over”.

Russia had also reportedly moved a frigate believed to be armed with cruise missiles into the eastern Mediterranean sea.

Assad in US sights

Defeating Islamic State, pushing Iranian influence out of Syria, and the ouster of Syrian President Bashar al-Assad are priorities for Washington, Ms Haley said in an interview.

“We don’t see a peaceful Syria with Assad in there,” she said.

The US ambassador’s statements will not quell rising concerns about the effect of Friday’s bombing.

The comments represented a departure from what Ms Haley had said before the US hit a Syrian air base with 59 Tomahawk missiles on Thursday in retaliation for what it said was a chemical weapons attack by Assad’s forces on Syrian civilians.

The diplomatic fallout is spreading, with the UK and Australia both ramping up rhetoric over the attacks.

Britain’s Defence Secretary Michael Fallon said Russia was responsible for “every civilian death” in Syria, while Vladimir Putin’s Kremlin was to blame “by proxy” because it was the Syrian president’s “principal backer”, he said.

His comments came after Britain’s Foreign Secretary Boris Johnson pulled out of a Moscow visit hours before he was due to fly.

“I have grave doubts as to whether he can have any continuing role in the settlement. The crimes he has committed against his own people are so enormous.”

“His actions, his horrendous, criminal actions, gassing women and children, babies, that surely disqualifies him from a continuing role.”

US demands Assad’s ouster as shockwaves roll around the world