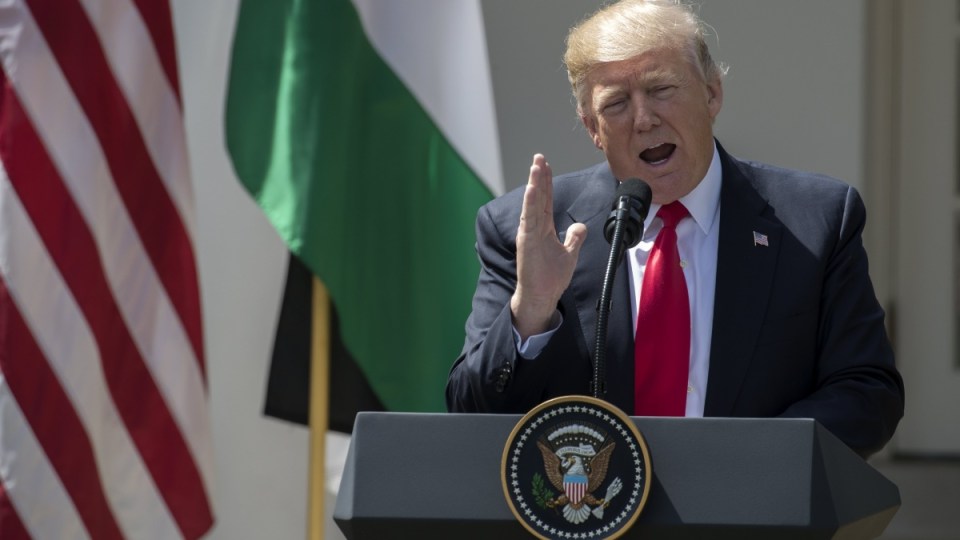 US President Donald Trump has signalled a major reverse in his administration’s Middle Eastern policy after the widely condemned chemical attack on a Syrian rebel-held town.

Speaking after talks with King Abdullah II of Jordan, President Trump told reporters the attack – and other recent attacks — had changed his mind on becoming involved in the Middle East.

The chemical attack “crossed a lot of lines for me,” he said when asked about how far he would go in his response to Syria. He added that he “very proudly” carried the responsibility to act.

Russia, the Assad regime’s military ally in its civil-war, prompted a furious reaction early Thursday (AEST) when it blamed the rebels for the deaths, saying a conventional airstrike hit a rebel-held chemical weapons store.

President Trump has previously avoided strong condemnation of the Assad regime and its role in the war in Syria, saying regime change was not its goal.

He did not elaborate on possible action against the Syrian government, but pointed to a far-reaching US policy change on its involvement in the Middle East.

Among possible changes are a re-negotiation of the US-Iran nuclear deal brokered by the Obama administration.

President Trump said he would “do what I have to do with respect to the Iran deal”, arguing it was one-sided against the United States and the Middle East.

“It should never have been made”, he said, blaming the Obama administration for “one of the worst deals” he had ever witnessed.

He also said he would do what he needs to do in order to “eradicate terrorism.”

Mr Trump repeated his line that the Obama administration was weak in its handling of Syria in previous years.

“The Obama administration had a great opportunity to solve this crisis years ago,” he said, referring to a 2013 chemical attack in Syria. At the time, then-president Barack Obama said it was a red line for him.

“It was a blank threat,” Trump said.

President Obama threatened an air campaign to topple Assad but called it off at the last minute after the Syrian leader agreed to give up his chemical arsenal under a deal brokered by Moscow.

Russia sparked a furious global reaction with its claim that Syrian President Assad is not to blame for the poison gas attack in Syria and that it will continue to back him.

Washington said it believed the deaths were caused by sarin nerve gas dropped by Syrian aircraft, but Moscow said the poison gas belonged to rebels and had leaked from an insurgent weapons depot hit by Syrian bombs.

The United States, Britain and France have proposed a draft UN Security Council resolution that would blame the Assad government, but the Russia and China vetoed it.

Kremlin spokesman Dmitry Peskov said Russia would take its case blaming the rebels for the poisoning to the United Nations.

Matthew Rycroft, the UK’s ambassador to the UN, told the UN Security Council that Mr Assad had “humiliated” Russia by “making a mockery” of the peace process it had brokered with some rebel groups.

“What is your plan to stop these horrific senseless attacks? We had a plan and we had the support, and you rejected it to protect Assad,” he said.

Video footage uploaded to social media showed civilians sprawled on the ground, some in convulsions, others lifeless. Rescue workers hosed down the limp bodies of small children, trying to wash away chemicals as people wailed and pounded on the chests of victims.

The charity Medecins Sans Frontieres said one of its hospitals in Syria had treated patients “with symptoms – dilated pupils, muscle spasms, involuntary defecation – consistent with exposure to neuro-toxic agents such as sarin”.

The World Health Organisation also said the symptoms were consistent with exposure to a nerve agent.

Turkish President Tayyip Erdogan said the attack had killed more than 100 people. That death toll could not be independently confirmed.