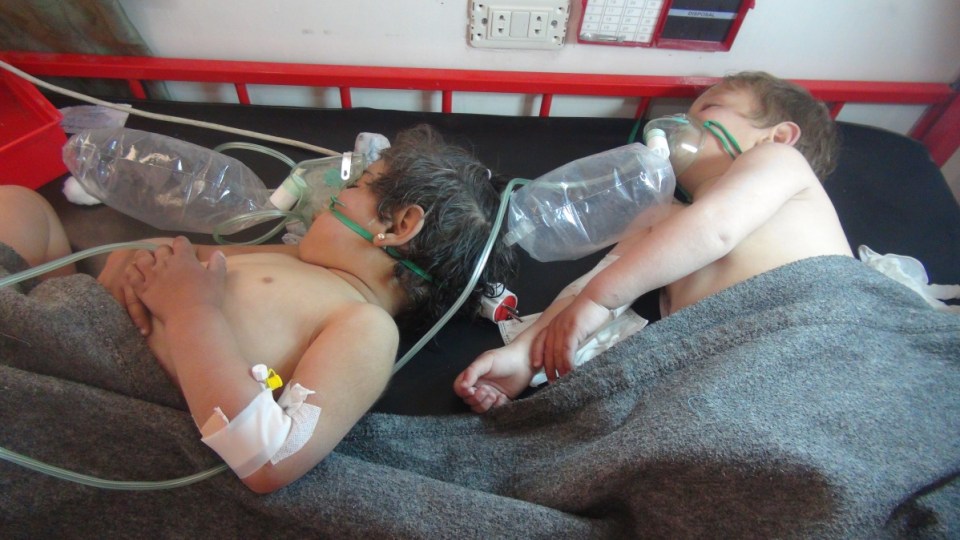 Dozens are dead after a chemical attack on a rebel-held province in Syria. Photo: Getty

Syria’s Bashar al-Assad regime is facing global condemnation after a chemical weapons attack killed scores of civilians, including children, in a rebel-held province.

The White House publicly blamed the Syrian government for the attack, calling it “reprehensible” act “that cannot be ignored by the civilised world”.

The UK and France have called for an emergency meeting of the UN Security Council to discuss possible action.

The Syrian military, meanwhile, has denied responsibility, saying it would never use chemical weapons.

The Syrian Observatory for Human Rights said at least 58 people died in the attack it believed it was carried out by Syrian jets.

Photographs and footage showed people breathing through oxygen masks and wearing protection suits, while others carried the bodies of dead children, and corpses wrapped in blankets lined up on the ground.

It is believed the chemical used bore the hallmarks of a nerve agent similar to sarin gas.

Mounzer Khalil, head of Idlib’s health authority, said hospitals in the province were overflowing with victims.

Warplanes later struck near a medical point where victims of the attack were receiving treatment, the Observatory and civil defence workers said.

The head of the health authority in rebel-held Idlib said more than 50 people had been killed and 300 wounded, while the Union of Medical Care Organisations, a coalition of international aid agencies funding hospitals, said at least 100 people had died.

The Russian Defence Ministry said its aircraft had not carried out the attack. The UN Security Council was expected to meet on Wednesday to discuss the incident.

The incident reported at Khan Sheikhoun would be the deadliest chemical attack in Syria since sarin gas killed hundreds of civilians in Ghouta near Damascus in August 2013. Western states said the Syrian government was responsible for that attack. Damascus blamed rebels.

“Today’s chemical attacks in Syria against innocent people including women and children is reprehensible and cannot be ignored by the civilised world,” Mr Spicer told reporters.

“These heinous actions by the Bashar al-Assad regime are a consequence of the past administration’s weakness and irresolution.”

Mr Spicer declined to respond to questions about President Donald Trump’s recent declaration that his administration’s policy in Syria is not regime change.

“He is not here to telegraph what we are going to do, but rest assured he has been speaking with his national security team this morning,” Mr. Spicer said, adding later: “The statement speaks for itself.”

Mr Assad has enjoyed staunch military backing from Iran and Russia in the war.

Britain said he would be guilty of a war crime if it were proved his regime was responsible. The UN envoy for Syria said the “horrific” chemical attack had come from the air.

Australia will consider further sanctions on the Assad regime if it’s found responsible for a chemical weapons attack.

“If the Assad regime has used chemical weapons, as is being alleged, that constitutes a war crime, it constitutes a shocking war crime,” Prime Minister Malcolm Turnbull told Tasmanian radio station 7AD on Wednesday.

A series of investigations by the United Nations and the Organisation for the Prohibition of Chemical Weapons (OPCW) found that various parties in the Syrian war had used chlorine, sulfur mustard gas and sarin.

Turkey, which backs the anti-Assad opposition, said the attack could derail Russian-backed diplomatic efforts to shore up a ceasefire.

Under the deal, Syria agreed to give up its toxic arsenal and surrendered 1300 tonnes of toxic weapons and industrial chemicals.

Investigators found, however, that it continued to use chlorine, in the form of barrel bombs.