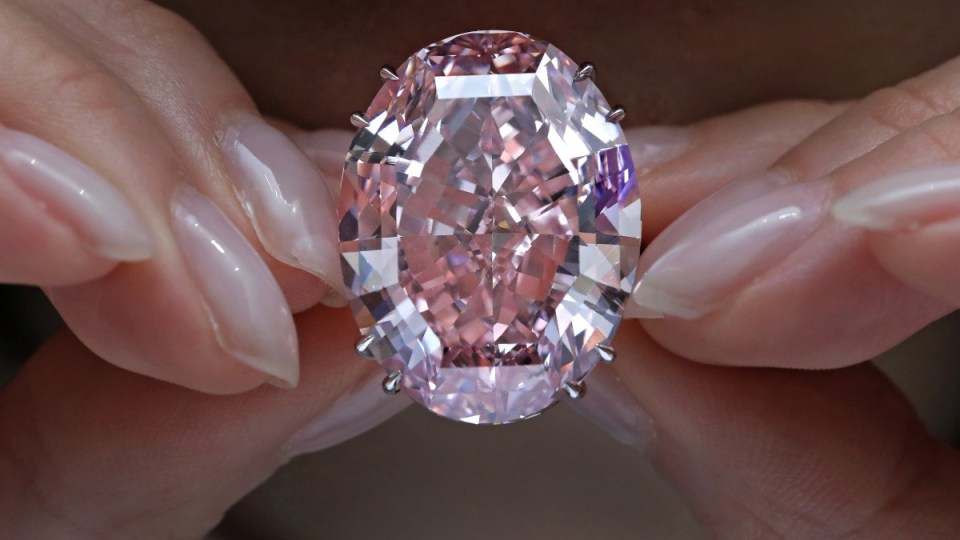 The diamond has sold in what is believed to be an auction record level for a precious gem. Photo: AAP

A rare diamond named the Pink Star has been sold for more than $AU94.29 million in world record gemstone auction sale.

The 59.6 carat stone was sold in Hong Kong after just five minutes of bidding, Sotheby’s said.

“The Pink Star was sought by three clients before selling to a bidder on the phone with our Asia CEO Kevin Ching,” Sotheby’s said on its Twitter account.

The sale of the 59.6-carat pink diamond was part of Sotheby’s “magnificent jewels and jadeite auction”.

The oval, mixed-cut pink diamond, roughly the size of a quail’s egg, is the largest internally flawless, fancy, vivid pink diamond the Gemological Institute of America has ever graded, Sotheby’s said.

“The extraordinary size of this 59.60-carat diamond, paired with its richness of colour, surpasses any known pink diamond recorded in history,” David Bennett, Worldwide Chairman of Sotheby’s Jewellery Division, said in a statement.

The gem was mined by De Beers in 1999 and the 132.5 carat rough diamond was cut and polished over a period of two years by Steinmetz Diamonds.

The previous record for a pink diamond was held by the “Graff Pink,” a 24.78-carat diamond that went for $US46.16 million dollars at Sotheby’s Geneva in November 2010.

Watch a video from when Sotheby’s acquired the diamond: