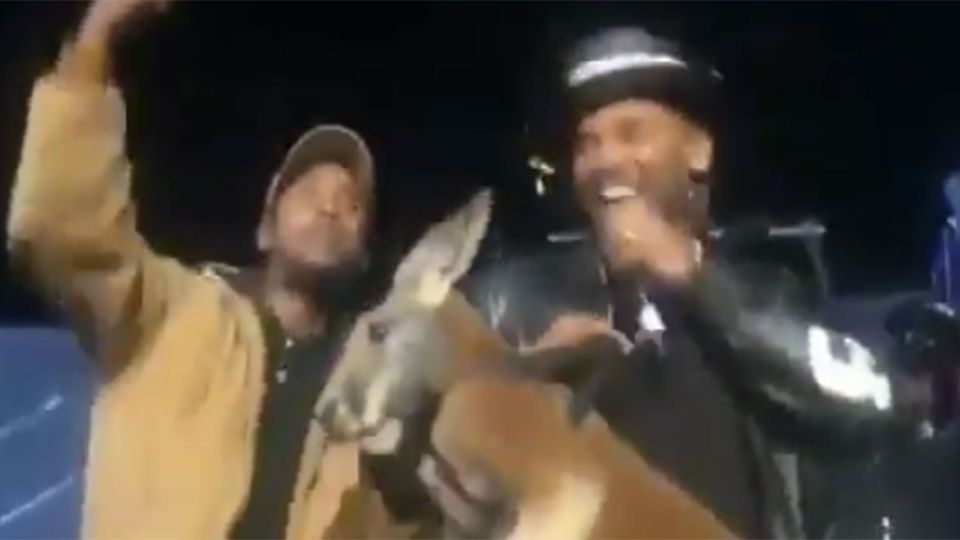 The kangaroo appeared to be distressed as comedian Mike Epps continued to dance around the wild animal. Photo: Twitter

US comedian and rapper Mike Epps has issued a public, albeit poorly worded, apology soon after he defended an on-stage stunt involving a kangaroo on a leash that has been condemned by many fans and welfare experts as “animal cruelty”.

In footage taken during Epps’ Detroit performance as part of his Festival of Laughs tour, a handler appears to pick up the evidently distressed kangaroo multiple times to bring it closer to the audience.

Epps, who starred in the film The Hangover as “Black Doug”, seemed to sometimes dance in the opposite direction of the wild animal and appeared to be struck by the kangaroo’s paw at one stage during the skit.

The comedian said he did not own the kangaroo and would be donating money to the Save the Kangaroo foundation.

The kangaroo had gone viral earlier that week when the handler was spotted in Detroit being pulled across the street while walking the kangaroo on a lead.

It later emerged that the kangaroo belonged to a travelling animal show, Exhibit Zoo, that owns “exotic” animals for birthday parties and schools. Epps copped widespread backlash following the performance and posted a video on Instagram of him feeding the kangaroo a banana in an initial attempt to defend his actions, which he since deleted.

But this did little to silence the critics.

“Don’t get me wrong, I love Mike Epps… but no wild animal should be around that much noise and screaming,” fan Haley Quinn wrote in a tweet.

“I didn’t think Mike Epps playing with the kangaroo last night was funny at all. That kangaroo look(ed) miserable and ready to snap,” another tweeted.

Epps quickly apologised, saying he “did not mean any harm to the animal”.

University of Queensland professor in animal welfare Clive Phillips told The New Daily the incident was an act of animal cruelty.

He said the stunt conveyed a message that kangaroos are an “exotic animal for our entertainment”.

“In fact they have a precarious existence in the wild and need our support. Kangaroos are not domesticated animals and would be severely stressed by the flashing lights, noise and large number of people,” Professor Phillips said.

“Cruelty is by definition ‘wanton or unreasonably doing or omitting any act that causes suffering to any animal’. Clearly it was wanton and unreasonable … Its attempts to escape, nervous demeanour and helpless actions also suggest distress.

“Kangaroos are an iconic Australian animal and deserve respect and assistance, not to be used for cheap exhibitionism.”

University of New South Wales’ Dr Siobhan O’Sullivan, a senior lecturer in social policy, said these actions would be considered “illegal” in Australia.

“In Australia the laws governing animals in entertainment tend to be particularly strong. This type of activity would not be lawful in Australia,” she told The New Daily.

“I assume he did it for publicity purposes. This is a terrible shame as it might encourage others to do likewise.”