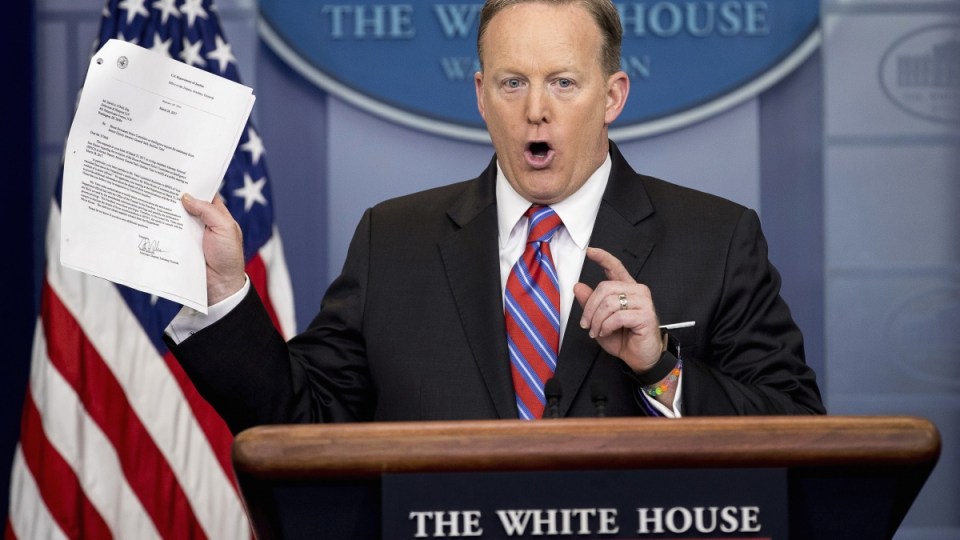 Sean Spicer has been criticised by some for the way he treated the reporter. Photo: AAP

White House Press Secretary Sean Spicer told a reporter to “stop shaking your head” during a tense exchange at his daily press briefing.

Mr Spicer appeared annoyed by April Ryan, Washington bureau chief for American Urban Radio Networks, when she asked what President Trump’s administration would do to revamp its image following reports of its ties to Russia.

“I appreciate your agenda here. At some point, report the facts.”

If you want to know why @AprilDRyan just tweeted “Lawd!!!!” — this is why. Watch the whole thing. pic.twitter.com/qIfXznVKL8

He said there has been no proven collusion between Trump associates and Russian officials over interference in last year’s election.

Mr Spicer quipped that “if the president put Russian salad dressing on his salad tonight, somehow that’s a Russian connection”.

Mr Spicer said Ms Ryan appeared “hell-bent” on projecting her own image of the White House when she asked what Trump might be doing to repair a relationship with former Secretary of State Condoleezza Rice, who did not support his campaign and was meeting with the president later this week.

He said the president was fulfilling a promise to build bridges with both supporters and opponents.

Later, in an interview on MSNBC, Ms Ryan said: “Sean is being the White House press secretary, talking about and trying to make this administration look better than what it does right now, and unfortunately I was roadkill today.”