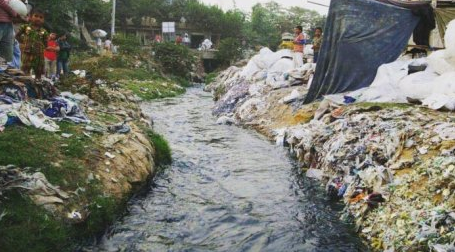 There are other disturbing statistics on the impact the fashion industry is having on the environment. In Australia alone, more than 500,000 tonnes of textiles and leather end up in landfill each year.

Low-cost, low-quality garments mean we are buying and disposing of more clothing than ever.

Roy Morgan Research has found 1.7 millions Australians are buying at least one pair of jeans in any four-week period.

So how fast is our fashion?

Clara Vuletich is a designer, researcher and co-creator of a sustainable design methodology used by brands including H&M and Gucci.

She told Lateline the design and manufacturing process now takes less than a week.

“That was never heard of before,” she said.

“So the designer can specify materials, it can get made, they can get it produced offshore and then it can get to the shop within in a week.”

An average of seven wears

Clare Press is a fashion journalist and the author of Wardrobe Crisis, a book exploring fast fashion’s impact on industry and the labour market.

She told Lateline that women are wearing a garment an average of seven times before getting rid of it.

“I’ve also read the statistic that the average woman wears only 40 per cent of what’s in her wardrobe, which means that 60 per cent is there ready to go to Vinnies or go to landfill,” she said.

Of those items donated to charity, it’s estimated only about 15 per cent are resold within Australia.

The rest are sold as industrial rags, sent to landfill, or sent overseas to developing nations.

Australians are the world’s second-largest consumers of textiles, buying an average of 27 kilograms of new clothing and other textiles each year.

Ms Press said a new film, River Blue, details just how rivers and waterways around the world are being poisoned by the textile industry.

“In some cases farmers can actually predict the colour of the season by looking at the colour that the rivers are running,” she said.

But designers and manufacturers are facing more pressure to improve their practices and Ms Vuletich said it is starting to pay-off.

“There’s been a lot more industry-led initiatives. I think they’re really realising they need to step up and take responsibility,” she said.

“There’s a zero-discharge initiative that a lot of the brands are realising that they need to really put pressure on suppliers in China around hazardous chemical waste into water.”

Clothing made from polyester, which is essentially a plastic, takes up to 200 years to breakdown in landfill.

And Ms Vuletich said natural fibres such as wool and cotton are not designed to go into landfill.

“A natural fibre like cotton or wool can biodegrade and compost, but actually landfill is not the right conditions for compost. Wool leaks a type of ammonia in landfill,” she said.

Pair of jeans the same price as takeaway

Ms Press said the idea of fast fashion is based on built-in obsolescence, with companies wanting consumers to buy more clothes all the time.

“It comes back to this idea of value. Value used to be about this idea of not just price, but quality,” she said.

“Today I think value is synonymous with this idea of a bargain.

“I looked at the price of a pair of high-waisted skinny jeans in Kmart . [They were] $15. They cost the same as a takeaway lunch in the city.

“Are you really going to think very much about keeping that garment or whether or not you want to hold onto it?”