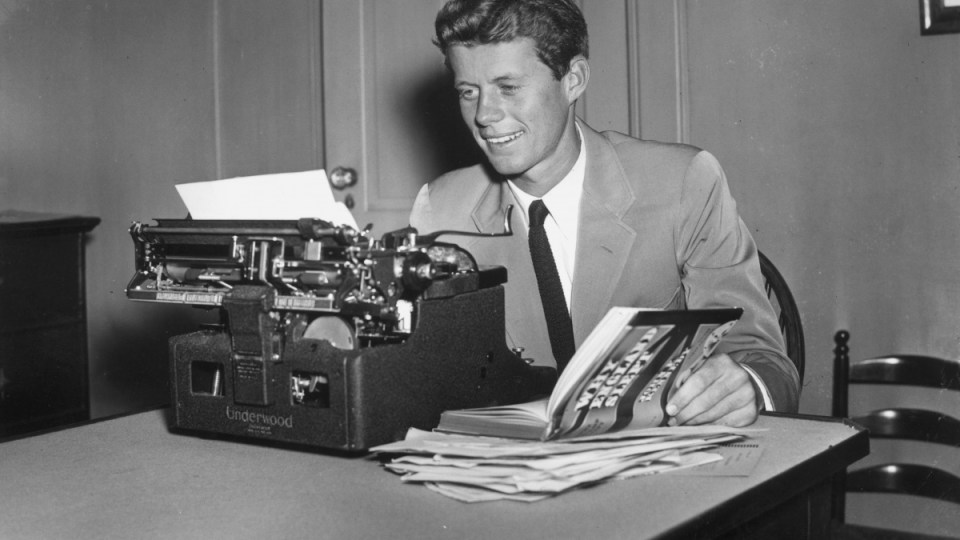 John F Kennedy said Adolf Hitler had in him "the stuff of legends". Photo: Getty

Written 16 years before he became President of the United States, a 28-year-old Kennedy called the dictator “the stuff of legends” in the 1945 leather-bound manuscript.

“He had boundless ambition for his country which rendered him a menace to the peace of the world, but he had a mystery about him in the way he lived and in the manner of his death that will live and grow after him,” Mr Kennedy wrote.

“He had in him the stuff of which legends are made.”

The diary was kept during a post World War Two trip when Mr Kennedy was working as a reporter for media magnate William Randolph Hearst.

Other musings in the 61-page diary include the 35th American President’s thoughts on Russian radicals in the US and former British Prime Minister Winston Churchill.

JFK’s former research assistant Deirdre Henderson released the diary, due to be auctioned in Boston on the 26 April.

In the auction description Ms Henderson insisted Mr Kennedy did not sympathise with Hitler, but was interested in his rise to power.

“Nowhere in this diary, or in any of his writings, is there any indication of sympathy for Nazi crimes or cause,” she said.

She said JFK was analysing the mystery surrounding Hitler.

“You can’t translate that as meaning he had admiration for him,” she told People.

RR Auction said it was proud to bring the little-known diary to the attention of US collectors.

“Discovered in a call from its long-time owner, Kennedy’s research assistant Deirdre Henderson, it is of great significance as the only diary JFK ever wrote,” RR Auction wrote.

The winning bid for the diary is expected to be around $200,000, according to CBS News.