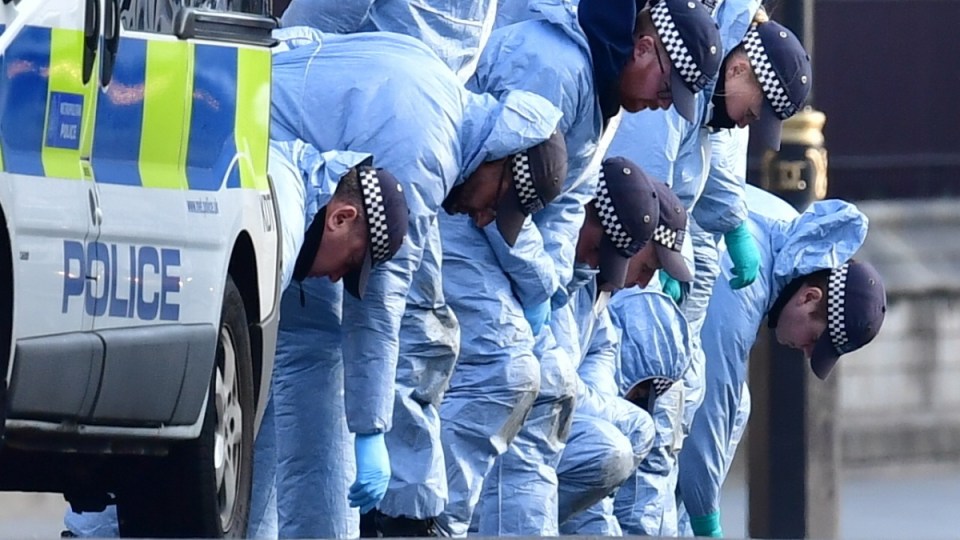 Police officers conduct a fingertip search at Carriage Gate near the Houses of Parliament. Photo: AAP

British police say they have made two further significant arrests in the investigation into the attacks on Westminster Bridge and the Houses of Parliament in London.

Police had earlier said the man behind the attack was British-born Muslim convert Khalid Masood and that they were trying to establish if others had directed him.

“Our investigation focuses on understanding his motivation, his operation and his associates,” Mr Rowley said.

“Whilst there is still no evidence of further threats, you’ll understand our determination is to find out if either he acted totally alone, inspired perhaps by terrorist propaganda, or if others have encouraged, supported or directed him.”

Police are combing through “massive amounts of computer data” and more than 2,500 items seized in searches.

“We’ve seized 2,700 items from these searches, including massive amounts of computer data for us to work through,” Rowley said, adding that contact had been made with 3,500 witnesses.

Mr Rowley said police had made two further “significant” arrests overnight, one in the West Midlands and one in the north-west of the country.

“We now have nine people remaining in custody, and one woman has been released on bail,” he said.

Masood, who  had shown up on the periphery of previous terrorism investigations that brought him to the attention of Britain’s MI5 spy agency.

But he was not under investigation when he sped across Westminster Bridge on Wednesday, ploughing down pedestrians with a hired car before running into the parliamentary grounds and fatally stabbing an unarmed policeman. He was shot dead by police.

Masood, whose birth name was Adrian Russell Ajao and was also known as Adrian Elms, hired a Hyundai 4×4 in person at the Enterprise Rent-A-Car in north Birmingham earlier this week, describing his profession as a teacher.

However, he never worked as a qualified teacher in English state schools, according to BBC reports.

Born in the county of Kent and a resident of the West Midlands in central England, Masood was known to police and the MI5 by several aliases and had a raft of previous convictions dating from 1983 to 2003.

Masood was once investigated in relation to concerns about violent extremism by British authorities, but the Metropolitan Police have said he “was not the subject of any current investigations and there was no prior intelligence about his intent to mount a terrorist attack”.

“He was a peripheral figure. The case is historic — he was not part of the current intelligence picture. There was no prior intelligence of his intent — or of the plot,” British Prime Minister, Theresa May told Parliament.

Mr Rowley said at least 50 people were injured in the attack.

He named 75-year-old Lesley Rhodes as the fourth victim, who died in hospital on Thursday.

Two remain in hospital in a critical condition, one with life-threatening injuries.

Scotland Yard said they have seized close to 3,000 items in raids across the country, including what is thought to be critical computer data.