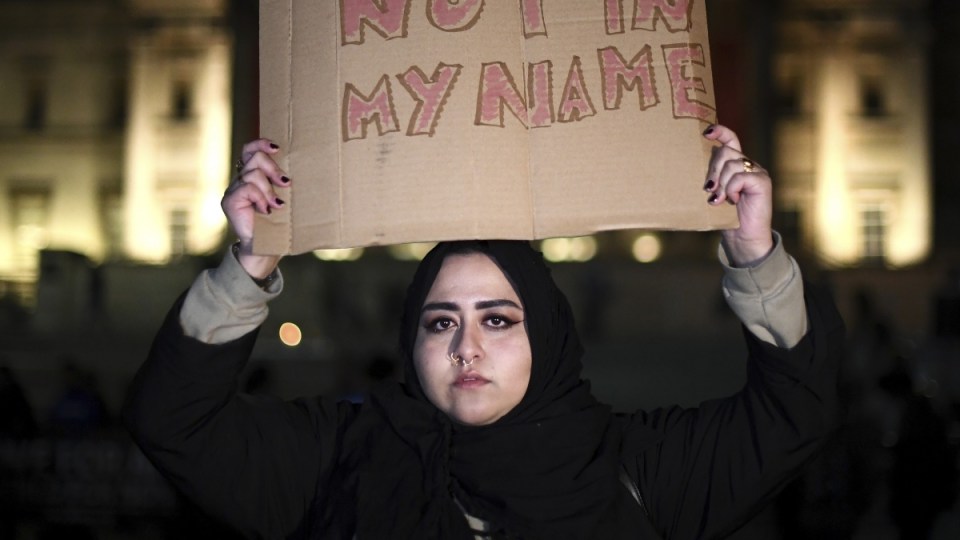 A woman holds a placard up during a candlelit vigil at Trafalgar Square .

Detectives are exploring the past of the middle-aged murderer of many aliases who wrought carnage in the Westminster attacks, as arrests connected to the outrage were made across the country.

Khalid Masood, a 52-year-old with a string of convictions stretching back decades, was unmasked by police as the home-grown terrorist who mowed down pedestrians in a car and fatally stabbed a policeman.

Eight people remain in custody after properties across the UK were raided, while a picture built up of the lone-wolf killer’s apparently nomadic lifestyle.

The death toll from his assault on the capital rose when a 75-year-old man became the fourth victim to die.  The man, who has not been named, had his life support withdrawn at King’s College Hospital.

The nation’s mourning continues, with candlelit vigils for the victims  scheduled in Birmingham and London.

Scotland Yard said Masood – who was shot dead by police – was born in Kent on Christmas Day in 1964.  Police said they did not believe Masood was his birth name but refused to comment on reports he was born Adrian Elms.

A spokesman said he was known by several different names and research into them was continuing.

On the eve of his attack, The Sun reported that Masood spent the night at the Preston Park Hotel in Brighton.

Scotland Yard said he was not the subject of any current investigations before the massacre and there was “no prior intelligence about his intent to mount a terrorist attack”.

But he was known to police and MI5 and had convictions for assaults, including GBH, possession of offensive weapons and public order offences.

His victims on Westminster Bridge included a US tourist from Utah who was celebrating his wedding anniversary.

Kurt Cochran and his wife Melissa, on the last day of a trip celebrating their 25th anniversary, were visiting her parents, who are serving as Mormon missionaries in London.  Mrs Cochran was badly injured.

Aysha Frade, who worked in administration at a school in Westminster, is understood to have been 43 and married with two daughters. Up to 40 other people were injured in the attack, with casualties including Britons, French children, Romanians, South Koreans, Greeks, and people from Germany, Poland, Ireland, China, Italy and the US.

Three police officers were also hurt, two of them seriously.

Police arrested three women and five men on suspicion of preparing terrorist acts after raids in London and Birmingham.

A minute’s silence was held nationwide on Thursday and crowds later gathered in Trafalgar Square for a candlelit vigil.

Theresa May said Masood was investigated some years ago in relation to concerns about violent extremism but was a “peripheral figure”. T

he Islamic State terror group claimed in a statement that the attacker was “a soldier of the Islamic State executing the operation in response to calls to target citizens of coalition nations”.