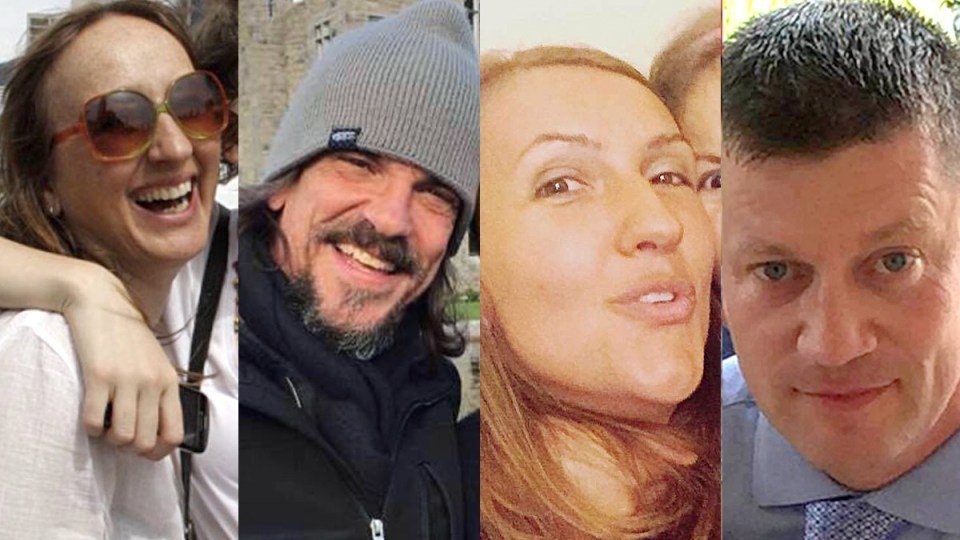 Londoners, tourists and politicians have gathered in London’s Trafalgar Square on Friday (AEDT) to pay respects to the four victims of the London terror attacks.

As more details emerged on the four people run down and killed by lone terrorist Khalid Masood, an emotional London Mayor Sadiq Khan told the crowd — many holding candles, flags and messages of support —to stand together to send a “clear message”.

Speaking at the event, Mayor Khan, a former British MP, said “Londoners will never be cowed by terrorism”.

Tonight we stood together to remember those who lost their lives and to send a clear message: Londoners will never be cowed by terrorism. pic.twitter.com/08xVcynlr4

More details have emerged on those who died during the car rampage when Masood ran down dozens of pedestrians on Westminster Bridge and then fatally stabbed a policeman about 3pm (GMT) on Wednesday.

Private Constable Keith Palmer, 48: Unarmed Constable Palmer was stabbed by Masood as he entered the grounds of Parliament.

“He was someone who left for work today expecting to return home at the end of his shift and he had every right to expect that would happen,” Acting Deputy Commissioner Mark Rowley said.

Witness Rick Longley described how “a guy came past my right shoulder with a big knife and just started plunging it into the policeman (Constable Palmer).”

Kurt Cochran, 54: Utah-based Mr Cochran, who ran a recording studio in the basement of his home in Salt Lake City, was on the last day of a European trip celebrating his 25th wedding anniversary when he was killed on Westminster Bridge.

His wife, Melissa, was seriously injured and remains in hospital. She suffered a broken leg, a broken rib and cuts and bruises.

Aysha Frade, 43:  British national Ms Frade, a mother of two from Spain, worked as an administrator at the DLD College, a school in Westminster.

A cousin of Ms Frade’s husband told London Evening Standard: “I can’t even put it into words how he’s [my cousin] feeling. His life’s completely fallen apart because of what’s happened. They’ve got young kids.

“When I heard I was just absolutely shocked. I’m still just feeling terrible, it’s a terrible thing to happen and you just don’t expect it to happen so close to home in this way.”

Trish Neis-Beer: The Adelaide Hills mother and cafe worker was visiting her daughter, Paige, in London when she was struck down and is now recovering in hospital with a foot injury.

According to The Sun, Masood checked into the two-star Preston Park Hotel, in Brighton, south of London, twice in the five days before his deadly car rampage.

A source told The Sun: “On both occasions he was asking for a cheaper rate. You would have thought if you were hellbent on committing a terror attack you’d chuck it all on credit card and forget the cost.”

Staff liked him so much they even wrote “nice man” on his computer booking.

Police are trying to trace his whereabouts over the weekend but he apparently said he had stayed in “London and Gatwick”.

Witnesses said he appeared “nice, polite and calm” and gushed about his wife.

UK police say Masood born in Kent and was once investigated by MI5 intelligence officers over concerns about violent extremism. He was most recently living in the West Midlands region of central England.

The Islamic State group claimed responsibility for the attack in a statement issued by its Amaq news agency, but did not name Masood and gave no details.

It was not clear whether the attacker was directly connected to the jihadist group.

“Masood was not the subject of any current investigations and there was no prior intelligence about his intent to mount a terrorist attack,” the Metropolitan Police said in a statement.

“However, he was known to police and has a range of previous convictions for assaults, including GBH [grievous bodily harm], possession of offensive weapons and public order offences.”