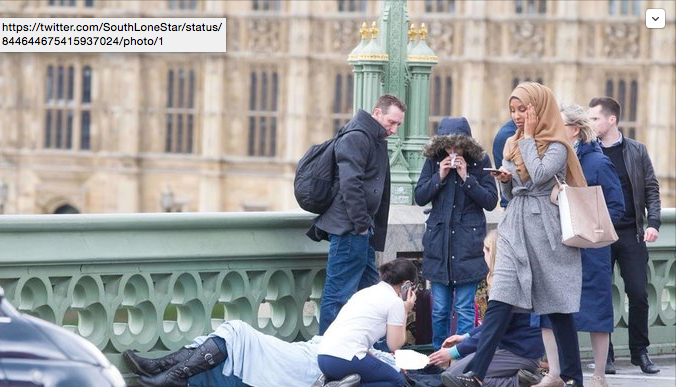 Freelance photographer Jamie Lorriman has defended the actions of a woman wearing a hijab walking past a victim of London's terror attacks says she looked "truly distraught". Photo: Twitter/James Lorriman

The photographer who captured an image of a woman wearing a hijab walking past a victim of yesterday’s London terrorist attack has defended her actions, saying she looked distressed and horrified.

The woman has become the centre of a debate online, with many Twitter users claiming she was casually ignoring a victim lying on the ground.

Freelance photographer Jamie Lorriman was underneath the Westminster Bridge at the time of the attack and began photographing at the scene moments later.

Lorriman said the scene was “quiet and tranquil”, describing a “strange sort of calm atmosphere”.

“No-one was sort of screaming or shouting.”

He says the idea that the woman he photographed wearing the hijab was ignoring the scene as she was walking past was wrong, and a series of images demonstrated she was most likely distressed.

“The people who took on that picture are being rather selective,” he said.

“In the other picture in the sequence she looks truly distraught … personally I think she looks distressed in both pictures.

The main difference between Muslims and Christians.#PrayForLondon #Parliament #Westminster pic.twitter.com/pefnYY090L

“It’s wrong it’s been misappropriated in that way.”

Lorriman said he would not assume what was going through her mind, and neither should people who were not at the scene.

US comedian Tim Young said it “could end up being one of the most iconic of our time”.

This photo taken by UK parliament today after the London terrorist attack could end up being one of the most iconic of our time #westminster pic.twitter.com/Xnq7ytJf93

“To assume she was ignoring someone is impossible to know, the look on the woman’s face, she’s horrified, she’s in the middle of a traumatic situation.

“She probably just wanted to get off the bridge,” he said.

“I feel so sorry for the woman in the picture. If she’s seen this, she must feel awful,” Lorriman said.

Some pointed to the expression on the woman’s face, which they described as distressed and concerned.

But others were quick to point out numerous other people — who were not wearing hijabs — also walked past victims in the aftermath of the attack.

A picture says 1,000 words. London terrorist attack, and this Muslim woman can't be bothered to put down her phone. #ReligionOfPeace #MAGA pic.twitter.com/SZBjfrN6cB