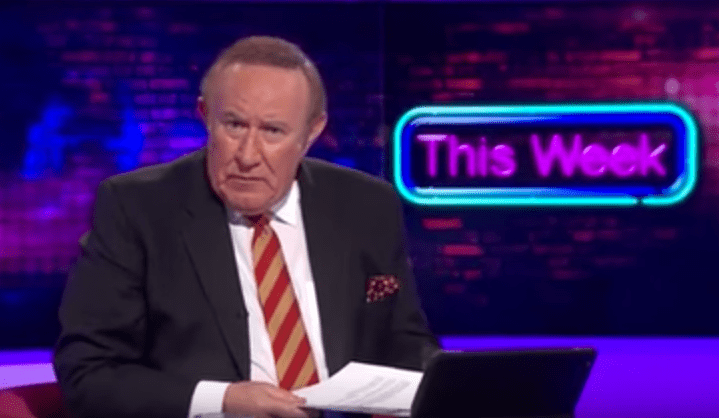 In the preamble to his This Week program on BBC One, Neil mocked radical Islamic terrorism, taunting would-be “jumped-up jihadis” with the line: “Do you have any idea who you are dealing with?”

“This is the country that stood up alone to the might of the Luftwaffe, air force of the greatest evil mankind has ever known,” the one-time editor of the Economist and Sunday Times said.

“If you think we are now going to be cowed by some pathetic Poundland terrorist in an estate car with a knife then you are as delusional as you are malevolent.”

Neil ridiculed the “jihadi Johnnies out there who think they will eventually triumph because their love of death is greater than out love of life … (but) for every brain-washed, brain-dead Islamist you send to do us harm, we have thousands upon thousands of Keith Palmers.

“You find them in every walk of life, in every part of the land … they are the British people and against them you will never prevail.

“Yes, you have the power to hurt us. Sometimes the hurt is more than we can bear. But you cannot defeat us.”

"Yes, you have the power to hurt us. Sometimes the hurt is more than we can bear. But you cannot defeat us" says @afneil opening #bbctw pic.twitter.com/VXGWb51kfL

The outspoken host has form when it comes to terror attacks. After the Bataclan attacks in Paris in November 2015, Neil lashed the “scumbags’ of ISIS” in a blistering rant on the same show.

Neil compared France with ISIS, holding France’s leading lights of culture such as Balzac, Moliere, Coco Chanel and even Daft Punk, up against ISIS’s “litany of beheadings, slavery and a death cult barbarity that would shame the Middle Ages”.

“In 1000 years’ time Paris, that glorious city of lights, will still be shining bright,” he said at the time.

Meanwhile, London’s Lord Mayor Sadiq Khan has delivered a masterful slap-down of Donald Trump Jr, the son of US President Donald Trump, the day after the London attack.

Within hours of the attack, Mr Trump Jr tweeted a link to a September 22 story from Britain’s Independent newspaper that included a quote by Mr Khan to London’s Evening Standard a day after a bomb went off in the city, injuring several people.

You have to be kidding me?!: Terror attacks are part of living in big city, says London Mayor Sadiq Khan https://t.co/uSm2pwRTjO

Mr Trump Jr was slammed for the tweet, with British MP Wes Streeting labelling the gesture “a disgrace”, and accusing him of using a terrorist attack for “political gain”.

During an interview with CNN on Thursday (GMT), Mr Khan delivered a subtle rebuke to the President’s son in refusing to address the twitter comments.

“I’m not going to respond to a tweet from Donald Trump Jr,” Mr Khan said.

‘Do you have any idea who you are dealing with?: BBC host’s ISIS taunt