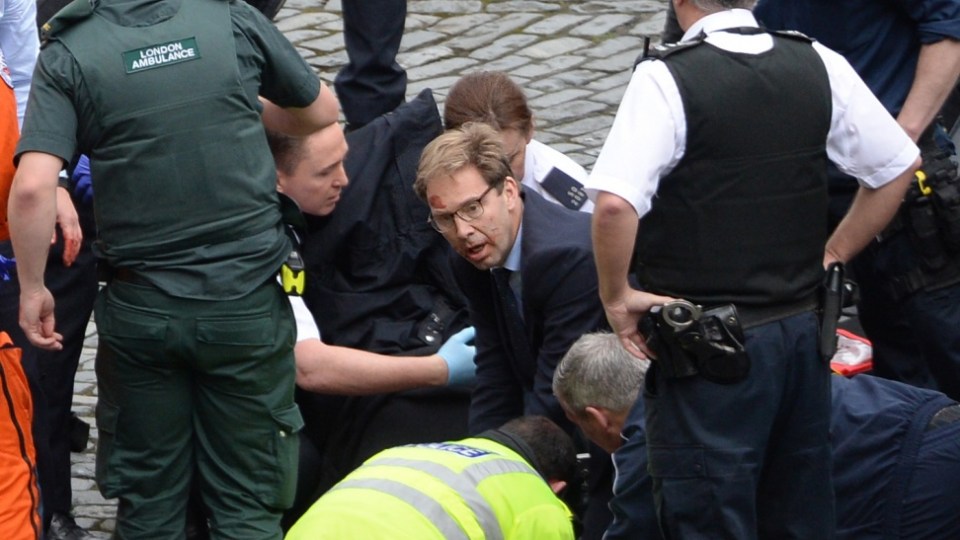 As the UK reacts in horror to a bloody terror attack on unsuspecting pedestrians and its national parliament, a British MP who tragically lost his brother to terrorism in the 2002 Bali bombings has been praised for his heroics in the aftermath of the rampage.

British Foreign Office Minister Tobias Ellwood rushed to the aid of a police officer who was stabbed during the Westminster terror attack and administered CPR, but was unable to revive him.

Surrounded by paramedics, with blood-soaked hands and forehead, Mr Ellwood gave mouth-to-mouth resuscitation to the fallen policeman and used his hands to stem blood flowing from the officer’s stab wounds.

Moments earlier, the attacker who stabbed the policeman had rampaged across Westminster bridge in a Hyundai i40, killing two other people and injuring more than 40, before confronting the police officer in an attempt to enter UK Parliament.

Parliament was suspended and forced into lockdown as British Prime Minister Theresa May was evacuated.

Four people are confirmed dead, including the driver, and 40 injured, according to local authorities. Central London was locked down after the incident, with additional police deployed across the city.

The Guardian reported Mr Ellwood – the MP for Bournemouth – remained with Mr Palmer, until an air ambulance arrived at the scene.

Mr Ellwood, who has since been hailed a “hero“, served as a captain in the Royal Green Jackets and can empathise with losing family from acts of terror, having mourned the death of his brother who was killed when a blast tore through the Kuta nightclub district in Bali.

In the hours after the attack, Mr Ellwood told UK paper The Sun that Mr Palmer’s death was a “huge tragedy”, but declined to provide further details of the incident.

“I am a witness, I was the last one on the scene before he died so I am not allowed to say anything,” he said.

“Number 10 (the Prime Minister’s office) has been in touch, so I’ll get into trouble.”

A witness to the Westminster attack, John Crace, told The Guardian he watched as the police officer died.

“Armed police officers ran to the scene. Some started tending to the bodies; others stood around. Another man came running out. I didn’t recognise him. None of us did, we must have all been in shock,” Mr Crace recounted.

“It later turned out he was Tobias Ellwood, a junior foreign minister whom we had all seen countless times before.

“Several armed police officers ran from New Palace Yard to talk to three paramedics dressed in yellow. They bypassed the first body – the assailant – and went straight to work on the fallen policeman. The scene became more ordered, yet more urgent. They worked for several minutes, hoping for a miracle that never came.”

It is understood the deceased police officer was unarmed at the time of the attack.

London Mayor Sadiq Khan said in a statement that Mr Palmer, a 48-year-old husband and father, was killed while “bravely doing his duty”.

“My heart goes out to his family, friends and colleagues,” Mr Khan said.

Ms May described the attack as “sick and depraved” and said the target, Westminster, was “home to the world’s oldest parliament [which is] ingrained with a spirit of freedom that echoes in some of the furthest corners of the globe.”

Australian Prime Minister Malcolm Turnbull said Australia stood in “resolute solidarity” with the UK while US President Donald Trump tweeted Ms May was “strong and doing very well” after the pair spoke.

Other world leaders including German Chancellor and Canadian Prime Minister Justin Trudeau also expressed their solidarity with the UK.