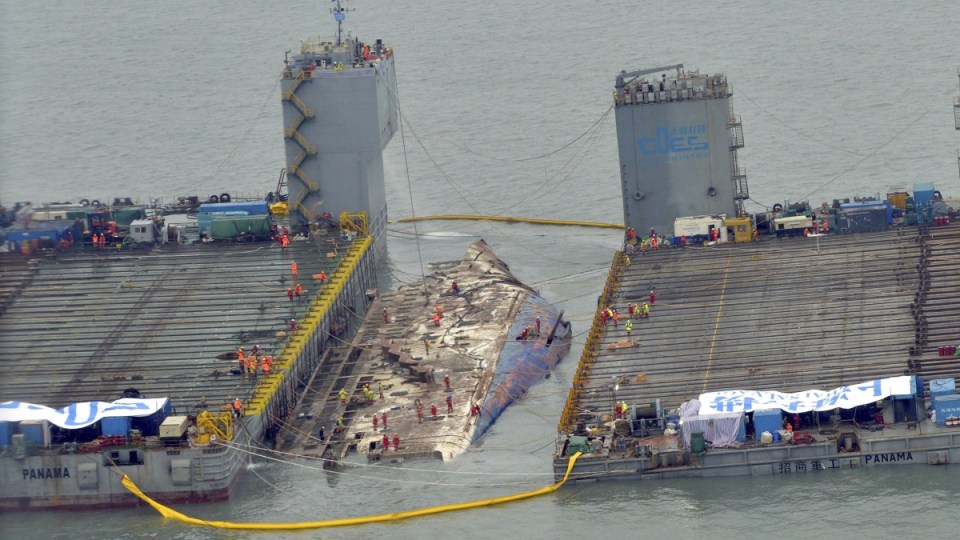 A South Korean ferry that sank nearly three years ago, killing 304 people, most of them children on a school trip, has been slowly raised from the ocean floor.

The ferry, the Sewol, emerged from a grey sea on Thursday, a sombre reminder of a tragedy that traumatised the country.

The vessel was structurally unsound, overloaded and travelling too fast on a turn when it capsized and sank during a routine voyage off the south-west coast on April 16, 2014.

Bereaved families have been calling for the ship to be raised and for a more thorough investigation into the disaster.

Salvagers started to bring up the vessel, which has been lying on its side at a depth of 44 metres, late on Wednesday, and worked through the night. 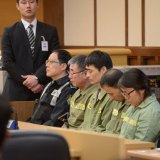 Television pictures taken from the air early on Thursday showed the white 140-metre long hull, coated in mud and sediment, breaking above the surface, flanked by winching barges.

A Chinese salvage company has fitted 33 beams beneath the hull with 66 hydraulic jacks inching the ship up.

Lee said the ferry would be raised as high as 13 metres above the sea and then moved onto a semi-submersible vessel.

That operation was expected to take until Friday and it would then be taken to a nearby port, but that could take up to 13 days, he said.

Once the sunken ferry had been secured on the semi-submersible vessel, bereaved families would be allowed to observe from a closer distance, another official said.

Of those killed, 250 were teenagers from the same high school, many of whom obeyed crew instructions to remain in their cabins even as crew members were escaping the sinking ship.

The salvage is costing about 85 billion won ($A98 million), another ministry official said this week.