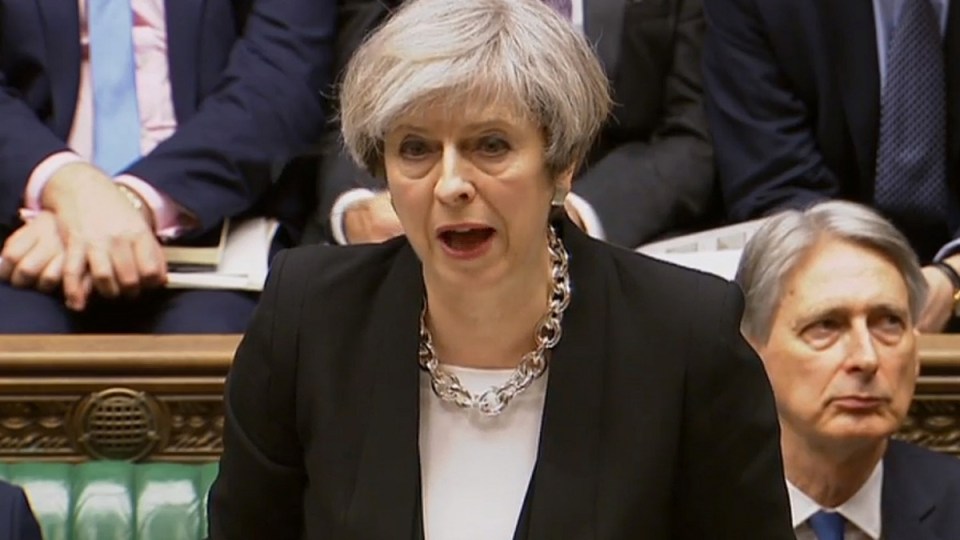 Prime Minister Theresa May says terrorism 'will not destroy our way of life'. Photo: PA Wire

UPDATE 8:32am – A fifth person has died following the terrorist attack outside parliament in London on Thursday (AEDT), as police revealed the alleged perpetrator was British-born father Khalid Masood.

Police said the fifth victim was a 75-year-old man who had his life support switched off early Friday morning (AEDT). The death toll of five included alleged attacker Masood.

Masood, 52, was born in Kent and had most recently lived in the West Midlands area. He was known by a number of aliases and was not the subject of any current investigations, police said.

Authorities had no prior intelligence about his intent to mount a terrorist attack. He was known to police for assaults, weapons offences and public order offences.

British Prime Minister Theresa May earlier said the alleged terrorist was investigated by MI5 “some years ago” in relation to concerns of violent extremism.

“He was a peripheral figure. His case was historic. He was not part of the current intelligence picture,” she said.

Five people were killed and dozens more injured in the terrorist attack at Westminster Bridge and the Houses of Parliament, for which Islamic State has claimed responsibility.

Victims of the attack have been named as veteran policeman Keith Palmer, 48, British national and teacher Aysha Frade, 43 and American Kurt Cochran. Cochran was visiting the UK from the US with his wife.

The details of the attacker came as Ms May made an emphatic address to the House of Commons, declaring: “We are not afraid and our resolve will never waver in the face of terrorism.”

She said the terror attack was an attempt to “silence democracy” and the “free speech, liberty, human rights and the rule of law which are embodied in Parliament”.

Ms May added that the “terrorist took out his rage on innocent men, women and children”.

A spokesman said that Spanish consular officials have made contact with Ms Frade’s relatives in Spain’s north-western region of Galicia.

The regional Voz de Galicia newspaper said that Ms Frade had been teaching Spanish in London.

Assistant police commissioner Mark Rowley said 29 people were being treated in hospital, with seven of them in a critical condition.

A German woman who lives in South Australia, and is a permanent Australian resident, was among those hospitalised, Prime Minister Malcolm Turnbull confirmed earlier on Thursday.

She was named as Trish Neis-Beer, a German national who lives and works in the Adelaide Hills.

The day after the attack, flags across London are flying at half mast and large parts of the city centre are still under tight police control, although cordons are being lifted from some areas.

Vehicles have been towed away from Westminster Bridge, which is still cordoned off, while the nearby Westminster underground train station is not accessible from street level.

The attack began when a speeding car ran down pedestrians on Westminster Bridge before crashing into the railings surrounding Parliament.

The driver then entered parliament grounds and fatally stabbed a police officer before being shot dead himself.

“The police and agencies that we rely on for our security have forestalled a large number of these attacks in recent years, over a dozen last year,” Defence Minister Michael Fallon told the BBC.

“This kind of attack, this lone-wolf attack, using things from daily life, a vehicle, a knife, are much more difficult to forestall.”

Three French high school students aged 15 or 16, who were on a school trip to London, were among the injured.

French Foreign Minister Jean-Marc Ayrault was expected to arrive in London to visit them at hospital, French media reported.

Two Romanian tourists and five South Korean visitors were also among the injured.

Conservative MP Tobias Ellwood, whose brother was killed in the Bali terror attack in 2002, performed first aid on the wounded police officer, who later died. Metres away lay the assailant.

“I tried to stem the flow of blood and give mouth to mouth while waiting for the medics to arrive but I think he had lost too much blood,” Mr Ellwood said. “He had multiple wounds, under the arm and in the back.”