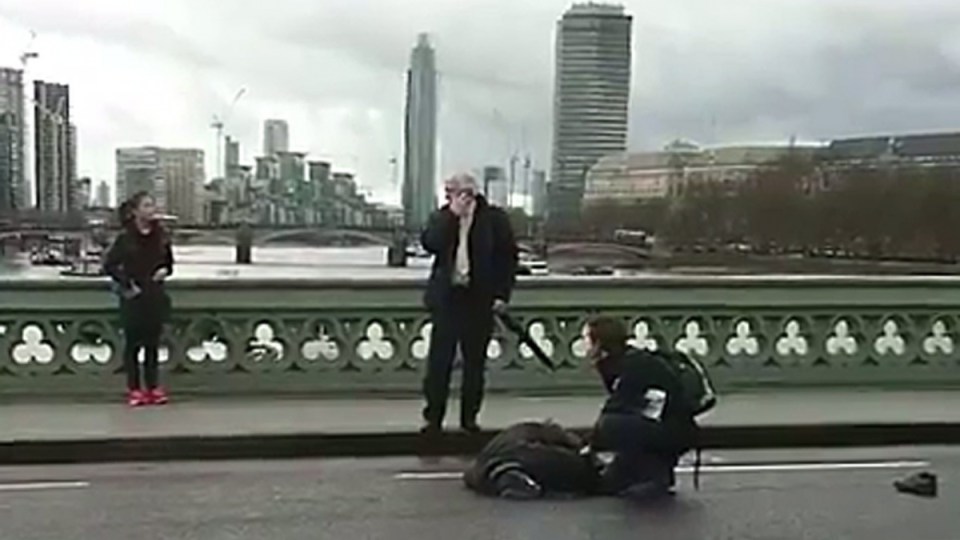 Witnesses have described the horrifying moments of a terrorist rampage on Westminster Bridge and around the Houses of Parliament in London on Wednesday (UK time).

It also emerged on Thursday afternoon that an Australian woman is among the 40 injured.

The woman is a German national with permanent Australian residency who has been living in South Australia. Senator George Brandis said the woman was being treated in hospital, and consular staff are providing assistance.

Four people are dead and about 40 were injured in the attack in central London, in which a lone assailant mowed down pedestrians on the bridge before fatally stabbing a police officer outside Parliament.

A doctor who treated the wounded from the bridge said some had “catastrophic” injuries. Three police officers, several French teenagers on a school trip, two Romanian tourists and five South Koreans were among the casualties.

One witness, Ismail, told the BBC he saw people “flying like a football” after being struck by the car. The man, Ismail, said he saw two victims on the ground, then a third “gentlemen flew up in front of me and landed in the middle of the road”.

Meanwhile, chilling footage has emerged of the moment a woman plunged into the River Thames as a car ploughs through crowds on the footpath of Westminster Bridge.

The CCTV footage shows the car speeding along the bridge and the woman flying over the edge in to the River Thames as it passed nearby.

Incredibly the woman was rescued alive from the river after the attack, which saw three members of the public killed on the bridge before the driver continued to the Houses of Parliament where he fatally stabbed a policeman.

A spokesman for the Port of London Authority told British media the woman “was recovered alive but injured. She needed urgent medical attention”.

The woman was reportedly taken to hospital with serious injuries, and it was unconfirmed whether the woman’s injuries were a result of impact with the vehicle, or from her fall into the river.

These are some other witness accounts of the attack:

Reuters photographer Toby Melville was on the footpath below Westminster Bridge taking photographs for a story about Brexit when he heard a body land near him.

“I heard a thud, turned round and there was a man lying about 10 yards away from me,” he said.

“There was a lot of blood coming from his head. I thought this must be a domestic or horrible accident.

“The noisiest part I can remember is the initial thud, which I’m sure was the shock in my mind of hearing the bloke landing behind me.

“At which point I thought this looks like it’s more than someone’s fallen over the wall.

“It was just surreal and it was a fairly quick computation that this was a serious incident and a lot of people injured.”

Poland’s former foreign minister, Radek Sikorski, says he was in a taxi leaving Westminster and was checking his email when he heard something like a car crash.

“People started running up to them. I saw one person who gave no sign of life, another man was bleeding from his head. In all, I saw five people who were at least seriously injured.”

Mr Sikorski tweeted a video of the injured being treated on Westminster Bridge.

A car on Westminster Bridge has just mowed down at least 5 people. pic.twitter.com/tdCR9I0NgJ

Steve Voake had travelled from Somerset to visit London and was walking along the Westminster Bridge when a bus abruptly stopped.

“Suddenly everyone started screaming. When I looked around there were bodies everywhere and then I looked over the edge of the bridge and there was a body floating in the water,” he said.

“Nobody had any idea what was going on so we just started trying to get everybody off the bridge.

“I was walking across the bridge and suddenly a bus stopped and people started screaming.

“There were a couple of bodies on the other side of the bridge and then the side I was on there was a body in the water with blood around it and then quite quickly a police launch came up and then there was a medic motorcycle.

“And then pretty quickly the police started arriving. They were very quick in fact starting to get people off the bridge.

“Somebody said they heard bangs but I didn’t hear that, I just heard screams.

“It’s very difficult to say but I think I saw three people on the ground being treated and the one in the water and there were bits of clothing. I would say they were pretty badly injured. One of them was covered.

“First of all I thought somebody had been hit by a bus and there’d been an accident, then when I started looking around and people screaming I heard someone say ‘a terrorist attack.”

Rick Longley said he saw a man stab a policeman outside Britain’s Parliament.

“We were just walking up to the station and there was a loud bang and a guy, someone, crashed a car and took some pedestrians out,” he said.

“They were just laying there and then the whole crowd just surged around the corner by the gates just opposite Big Ben.

“A guy came past my right shoulder with a big knife and just started plunging it into the policeman.

“I have never seen anything like that. I just can’t believe what I just saw.”

Rob Lyon was standing near Big Ben and he described the moment the attacker’s car rammed into pedestrians near Parliament.

“And then I heard a big sort of crunch,” he told the ABC.

“Then I saw the vehicle mount the kerb, and it was coming at us so quickly. I saw some people be hit in front of me.

“And then I looked around me in shock because I could see bodies and people. Yeah, real shock.”

Victims were ‘flying like a football’ as terrorist mowed down pedestrians