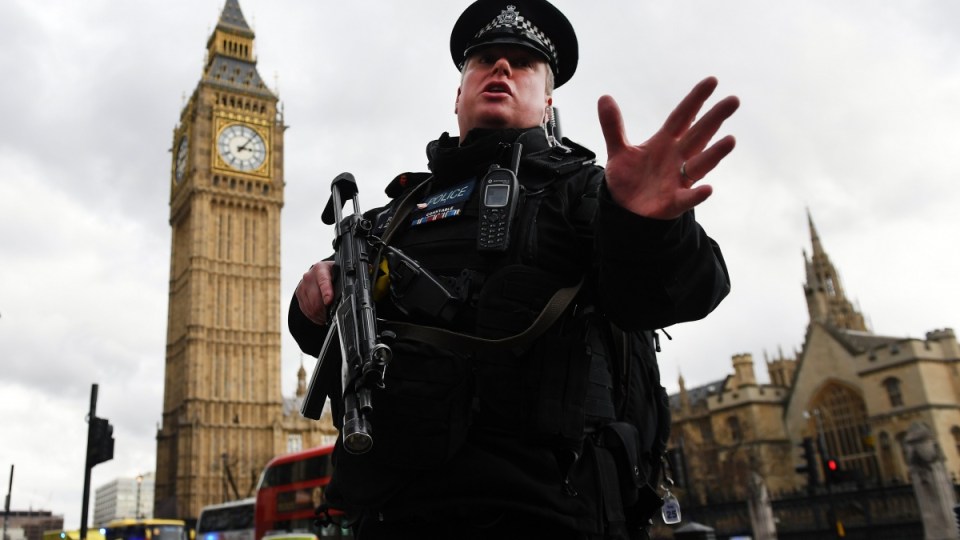 A police officer urges people away from the horrific scene near Westminster Palace. Photo: AAP

A terrorist attack at the Palace of Westminster in London has killed four people, including a police officer and the attacker, and injured at least 40, in an incident British Prime Minister Theresa May described as “sick and depraved”.

Two of the dead were struck by a car on Westminster Bridge while a police officer was fatally stabbed by an attacker trying to enter the Houses of Parliament. The attacker was shot dead by police.

The dead police officer has been named by the Metropolitan Police Service (MPS) as Keith Palmer, 48, who was a father and 15-year veteran of the force.

Police said a “full counter-terrorism inquiry” was being conducted in response to the incident and that many of those injured had “catastrophic injuries”.

He also revised the death toll down from five to four.

Parliament was cancelled for the day while Ms May was evacuated from the area and taken to a secure location.

Ms May spoke to the media outside her Downing Street home almost seven hours after the attack. She paid tribute to the victims and emergency services involved.

“Our thoughts and prayers go out to all who have been affected [and] to the victims themselves, and their families and friends who waved their loved one off but will not now be welcoming them home,” Ms May said.

“The exceptional bravery of our police and our security services … once again today these exceptional men and women ran toward the danger … I want to pay tribute to them and all our emergency services.

“The location of this attack was no accident … where people of all nationalities, religions and cultures come together.

“These streets of Westminster, home to the world’s oldest parliament are ingrained with a spirit of freedom that echoes in some of the furthest corners of the globe.”

The incident began at 2:40pm local time Wednesday (1:40am Thursday AEDT) when a large car mounted the curb on Westminster Bridge and ran down numerous pedestrians.

Here, at least two people were killed and many others injured, including three police officers.

The car then drove onwards and smashed into a fence outside Parliament.

Dozens of people in the area, which is normally packed with tourists and parliamentary staffers, fled the scene. Shortly afterwards, witnesses said the man who had driven the car entered the grounds of parliament with a knife. A police officer confronted the man and was stabbed to death.

Other police officers then shot the attacker dead.

Knife was ‘plunging into policeman’

“A guy came past my right shoulder with a big knife and just started plunging it into the policeman,” witness Rick Longley told the Press Association.

Witnesses say three to four shots were then fired by the officer’s colleagues and the attacker was seriously injured.

George Eaton, a journalist with the New Statesman, said that from the window of Parliament’s Press Gallery, he saw police shoot a man who charged at officers.

“A large crowd was seen fleeing the man before he entered the parliamentary estate,” he wrote on the publication’s website. “After several officers evaded him he was swiftly shot by armed police.”

A woman was pulled from the River Thames after the attack, the Port of London Authority (PLA) said, adding that she was being treated for serious injuries.

“A female member of the public was pulled from the water near Westminster Bridge, alive, with serious injuries,” a PLA spokesman told Reuters.

He added that the river had been closed to all non-emergency traffic in the immediate area.

Foreign minister Julie Bishop, speaking at an anti-Islamic State coalition conference in the United States, said she was not aware of any Australians involved in the incident “to this point”.

Ms Bishop said she had spoken to her UK counterpart Boris Johnson following the attack.

All offices in the area were placed in lockdown as was the nearby underground train station.

The nearby London Eye ferris wheel was brought to an immediate halt meaning passengers were stuck in mid-air.

London’s day of horror came on the one year anniversary of the Brussels terrorist attacks in Belgium, which killed 32 people.

– with ABC and agencies