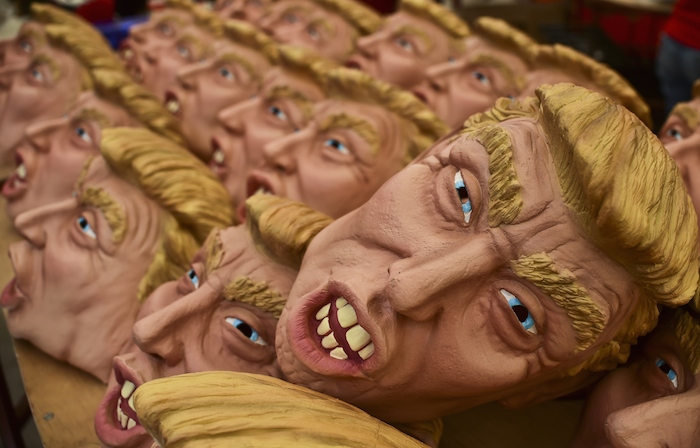 The Trump presidency is posing some problems for satirists, Armando Iannucci says.

The writer behind landmark political satires such as The Thick Of It, In The Loop and Veep is struggling to come to terms with the election of Donald Trump as US President.

“Satire is all about exaggerating,” Armando Iannucci told 7.30.

“It’s about taking something and making it absurd, essentially fictionalising something. So, actually lying, coming up with an untruthful version of a true fact.

“But that’s what Donald Trump does anyway.

“He uses these untruths. He lies, he exaggerates, he distorts.

“He is a walking satire balloon.”

And that, according to Mr Iannucci, is the problem that the satire business is having with the Trump presidency.

“He’s sort of doing the work that we do,” he said.

Learning the language of Trump

His language, use of Twitter and the propensity to attack even the most trivial critics are part of a new political universe.

“He’s taken us all into a world where we thought things were unacceptable, and he’s almost in the process of brainwashing us into thinking that they are acceptable,” Mr Iannucci said.

But, Mr Iannucci says, it’s up to Mr Trump’s opponents to learn how to operate in this new environment.

“I think we’ve all got to learn this language fast, so we can best use it against him,” he said.

And Mr Iannucci is practicing what he’s preaching.

He’s taken to retweeting Mr Trump’s tweets with his own commentary attached – in the language of Trump.

“I got increasingly angry with some of his tweets, but then I thought, that’s what he wants,” Mr Iannucci said.

“It’s a great diversionary tactic that he uses.”

So Mr Iannucci decided to take a different tack.

“I started by insulting him and then I thought it might be nice to paraphrase his tweets in his own style.

“He’s someone with such a thin skin who is easy to make fun of, but the problem is when you make fun of him, he reacts in such a way that you just can’t predict.

“Now, that’s fine if he’s just a person, but he’s the most powerful man in the world.

“What happens when you push the most powerful man in the world into a position where they will respond in an extremely unstable and unpredictable way?”

Armando Iannucci is a keen observer of politics in all its drama and absurdity.

And last year, Australia’s own Prime Minister, Malcolm Turnbull, appeared on his radar for using a slogan the writers of Veep had coined.

“When our Vice President [in Veep] was running for President we thought we’d come up with the most inane slogan we could imagine, that would please everyone,” he said.

“So, our slogan was ‘continuity with change’.”

“So when Malcolm Turnbull was trotting that out not long after I just couldn’t quite believe that no one had checked.”

It wasn’t the first time something like that had happened to Mr Iannucci.

He saw it as just another illustration of the blurring of the lines between politics and showbiz.

“We do a lot of things in the show — we make them up, because we think, what could be the most absurd thing we can come up with? And then it usually happens two or three weeks later.

“Or, we put something out that is just weird and awful, and then a politician will contact us a couple of days later saying, ‘How on earth did you find that out? I thought we kept that quiet’.”