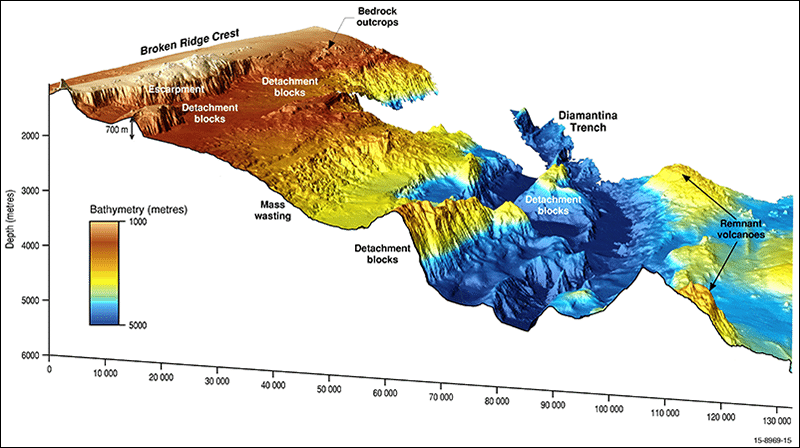 Mapping of the sea floor performed during the search for MH370. Image: Geoscience Australia

When Malaysia Airlines Flight MH370 vanished three years ago, the mystery wasn’t simply where the plane went down, but into what kind of world did it come to rest.

Relatives of the 239 people aboard MH370 have suffered repeated disappointment and at times have felt that their plight wasn’t being sufficiently addressed.

They may take some comfort that the two-year search of the Indian Ocean’s floor, by geophysical survey teams, was so painstaking and detailed that it has enabled the creation of state-of-the-art maps of the seafloor topography, and a better understanding of the geological processes occurring kilometres below the surface of the ocean.

The tragedy took scientists to places that nobody had ever seen before with any clarity.

Kim Picard, Brendan Brooke and Millard F. Coffin were part of the team at Geoscience Australia that worked on translating the data gleaned from the search, and turning it into maps.

They have just published a summary of their findings in the journal Eos.

While the global ocean covers 71 per cent of Earth’s surface, “the ocean floor remains poorly studied compared to the land surface”.

The reason is simple – light doesn’t penetrate down through kilometres of water and until recently the technology, notably acoustic mapping techniques, wasn’t working well enough.

Previous maps of the Indian Ocean, obtained indirectly using satellite-derived gravity data, had an average spatial resolution (think of it in terms of pixels on your camera) of five square kilometres.

Any feature smaller than five kilometres across wasn’t picked up.

This provides an insight into the difficulties facing the scientists who went looking for MH370.

Their success – in terms of mapping the floor if not finding the plane – was enabled by multibeam echo sounders, a sophisticated form of sonar that provides a more detailed picture of what lies below.

“Ship-mounted multibeam echo sounders that use sound waves that echo off the ocean floor provide much finer and more accurate topographic data for the deep ocean floor with a spatial resolution … at least 100 (metres) in 5000-meter water depths,” the scientists wrote.

“Such fundamental spatial information is essential for characterising the physical features of the ocean floor, for making inferences on geological and oceanographic processes, and for identifying the habitats of species that live on the ocean floor,” they wrote.

However, only 10 to 15 per cent of the ocean basins have been mapped using multibeam echo sounders.

The Australian scientists have added about 279,000 square kilometres of the south-eastern Indian Ocean to the body of knowledge. They describe the floor of the Indian Ocean as “a complex mosaic of normal oceanic crust … submarine plateaus and ridges, seamounts, sea knolls, and microcontinents”.

Also just published in Eos is a spooky survey of airline routes over unmapped ocean waters.

The report’s authors found that “of the total over-ocean distance covered by all unique overseas flight routes, 60 per cent is above unmapped areas”.

One in 10 over-ocean routes fly more than 2000 kilometres over unmapped seas. Some big-circle flights, if they went down, without deviating from their route, would leave a mystery 9200 kilometres long.