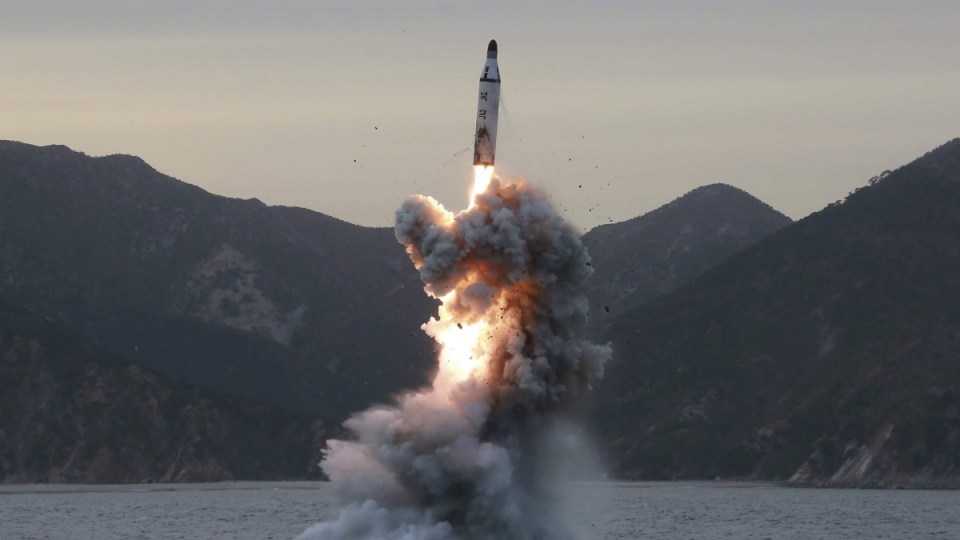 North Korea has thumbed its nose at the US by testing a new type of high-thrust rocket engine, just over a day after US Secretary of State Rex Tillerson warned of the possibility of pre-emptive military action against the nuclear-equipped, reclusive regime.

North Korean leader Kim Jong-un hailed the rocket test as “a historic day which can be called ‘March 18 revolution’ “.

In his New Year’s address in January, Kim said North Korea had “entered the final stage of preparation for the test launch of intercontinental ballistic missile”. The aim of the ICBM would reportedly be to reach the United States mainland.

Almost two weeks ago North Korea carried out a missile launch exercise it said was targeting US bases in Japan, and in his New Year’s address, Kim said Pyongyang was almost ready to test-fire an intercontinental ballistic missile.

Mr Tillerson, who has just completed a three-country visit to east Asia, on Friday signalled a tougher US strategy towards North Korea.

Speaking in South Korea, he said options for the US include the possibility of pre-emptive military action, while rejecting talks with the North until it gives up its weapons of mass destruction.

Let me be very clear: the policy of strategic patience has ended.

“We are exploring a new range of diplomatic, security and economic measures. All options are on the table.”

North Korea is behaving very badly. They have been "playing" the United States for years. China has done little to help!

“You said that China-US relations can only be friendly. I express my appreciation for this,” Mr Xi said.

He said he had communicated with Mr Trump several times through telephone conversations and messages.

“We both believe that China-US cooperation henceforth is the direction we are both striving for. We are both expecting a new era for constructive development,” Mr Xi said.

“The joint interests of China and the United States far outweigh the differences, and cooperation is the only correct choice for us both,” Mr Xi added, in comments carried by China’s Foreign Ministry.

China has reportedly been irritated at being repeatedly told by Washington to rein in North Korea’s nuclear and missile programs, and the US decision to base an advanced missile defence system in South Korea.

Mr Trump has so far been an unpredictable partner for China, attacking Beijing on issues ranging from trade to the South China Sea and in December by talking to Taiwan President Tsai Ing-wen.

Past US administrations have considered military options against North Korea and have publicly said that an attack on the US or its allies would prompt a devastating response.

The Washington Post has quoted former members of the Clinton administration as saying the US considered a strike on a North Korean nuclear facility in 1994 when it appeared on the brink of producing weapons-grade fissile material and refused United Nations inspections.

North Korea has since violated multiple UN Security Council resolutions and has been undeterred by tough international sanctions.

It test-fired four missiles into seas off Japan last week as the US and South Korea began annual military drills that the North claims are rehearsals for invasion.