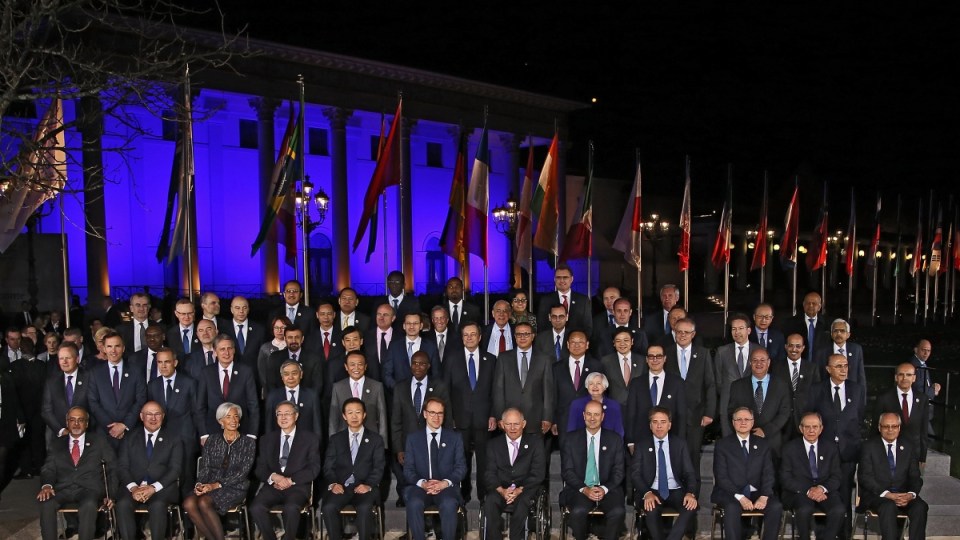 Participants in the G20 Finance Ministers and Central Bank Governors Meeting pose for a photo in Baden-Baden, Germany.

Finance ministers from 20 world powers have struggled at talks in Germany to find a common position on trade in the face of resistance from the United States.

The administration of President Donald Trump is calling for the Group of 20 to drop its long-standing commitment to free trade and opposition to protectionist policies.

The fight is over the wording of the final declaration of principles and policies issued by the ministers and their central bank chiefs at the end of Saturday’s meeting.

US Treasury Secretary Steven Mnuchin has been demanding the language be watered down, with the deadlock after two days of talks now coming down to a few words, G20 sources said.

Host nation Germany is attempting to broker a compromise over the document, drafts of which were worked on and circulated in advance of the meeting in the spa town of Baden-Baden.

Sources close to the talks say the ministers were presented on Saturday with a compromise text that attempts to strike a balance between the position of the US and other powers.

The final communique at last year’s meeting in China was blunt. It said the 19 leading industrial nations plus the European Union “will resist all forms of protectionism”.

This year Washington wants the G20 to accommodate Trump’s “America First” plan and his demand for what he describes as a fairer trading system that better reflects US interests.

The G20 finance ministers and their bankers have already reached agreement on a slew of issues including market regulation, moves to combat terrorist financing and promoting economic development in Africa.

The divisions on display in Baden-Baden were mirrored in Washington on Friday, when Trump hosted German Chancellor Angela Merkel at the White House.

Trade was the main focus of their talks, with Merkel accompanied by an entourage of German industry leaders to help make her case that protectionist policies such as border taxes hurt all sides.

At a fractious press conference Trump denied being an isolationist. But he asserted that the US has been treated “very, very unfairly by many countries over the years” and pointed to Germany as having done “very well in its trade deals with the US”.

Merkel was quick to clue in the president that Germany cannot negotiate trade deals outside of the European Union and defended globalisation.