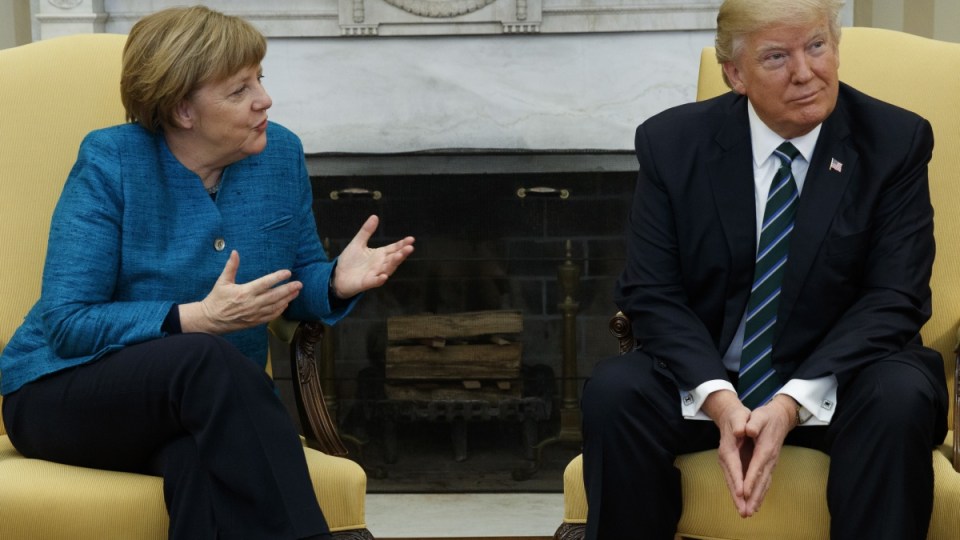 But by far the most uncomfortable few seconds during the Friday meeting at the White House Oval Office occurred when photographers requested a handshake from the pair.

As cameras flashed, Ms Merkel appeared to ask Mr Trump: “Do you want to have a handshake?”

But there was no response from the President, who looked straight ahead with his hands clasped together, leaving Ms Merkel to sit blankly in silence.

It remains unclear whether the President simply did not hear the request over the din of the photographers or whether the rebuke was intentional.

Photographers: Can we get a handshake?
Merkel (to Trump): Do you want to have a handshake?
Trump: *no response*
Merkel: *makes awkward face* pic.twitter.com/ehgpCnWPg7

The meeting between the leader of Europe’s largest economy and the US president was billed as one that could help determine the future of the transatlantic alliance and shape their working relationship.

“I reiterated to Chancellor Merkel my strong support for NATO as well as the need for our NATO allies to pay their fair share for the cost of defence,” Mr Trump said at an earlier joint news conference with Ms Merkel on Friday.

Mr Trump said he expected the US to do “fantastically well” in trade with Germany, while Merkel said she hoped the US and the EU could resume discussions on a trade agreement. Trump said he did not believe in isolationism but that trade policy should be fairer.

“We held a conversation where we were trying to address also those areas where we disagree, but we tried to bring people together … (and) tried to find a compromise that is good for both sides,” Ms Merkel said.

‘At least we have something in common’

Mr Trump brushed off questions about his claims without evidence that his predecessor, Democrat Barack Obama, wiretapped him during last year’s presidential campaign.

Mr Trump said, “At least we have something in common,” apparently referring to reports during Obama’s presidency that the US bugged her phone.

Congressional leaders from both political parties say they do not believe Trump was wiretapped.

Earlier, the new US president did greet the long-serving stateswoman at the White House with a handshake before they began talks in the Oval Office.

As a presidential candidate, Mr Trump criticised Ms Merkel for allowing hundreds of thousands of refugees into Germany.

At the news conference, Ms Merkel hinted at differences, saying: “This is obviously something we had an exchange of views about.”