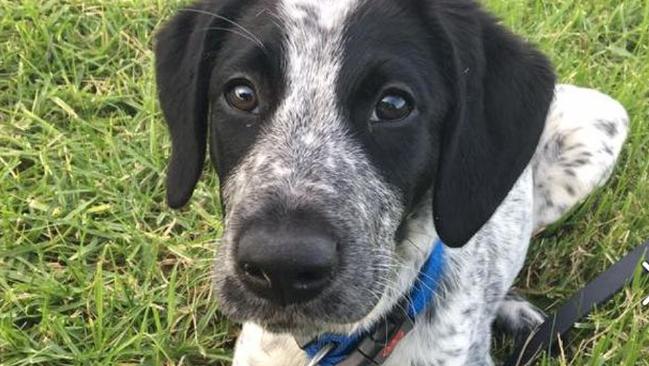 Grizz was shot dead after the dog's escape caused 16 flights to be delayed. Photo: Facebook

Outrage has greeted the shooting of an airport sniffer dog in New Zealand, with some on social media urging a travel boycott of the country.

Grizz, a 10-month-old german short-haired pointer cross, was shot dead by police after it was spooked, escaped its handler and caused chaos on the tarmac at Auckland Airport, delaying 16 domestic and international flights.

The Aviation Security Service (Avsec) dog escaped while being loaded into the back of a unit wagon in the public area at the airport about 4.30am.

For about three hours, security staff used toys, food and other dogs to coax Grizz back in, but the area was so vast and so dark at the time, that airport staff finally instructed police to shoot the dog.

NZ-based animal protection group Safe said it was “appalled about the needless killing of this dog”, while social media reacted with disgust at the shooting.

“I suppose they didn’t have (a tranquilliser) but that’s not an excuse,” spokesman Hans Kriek said.

“Do they not have a tranquiliser gun? It’s only Auckland Airport … So? 16 flights were delayed. So? I don’t care if your flight is delayed,” Barry said.

“Forget a review (of the incident) — just don’t shoot the dog.”

“They did everything they could, but unfortunately the dog had to be shot,” she said. “We’re really upset about it.”

Nicky Thorburn, the son of handler at the time Grizz broke free, took to Facebook urging sympathy for his father, Noel, a customs officer reportedly with 30 years’ experience.

“It was a last resort, my dad is very upset about this,” Nicky wrote.

“I’m reading disgusting comments … and people need to understand how traumatising and upsetting this was for him.

Around 75 per cent of 28,000 readers in a poll on news website stuff.co.nz felt more humane methods could have been used, while many on social media were more emphatic.

“I’ve been waiting for a legitimate reason to start a ‘Boycott New Zealand’ campaign,” @SubParLover wrote on Twitter.

@SeaTurt1e “WTF, New Zealand? No other option? The only one in danger was Grizz! He deserved better.”

Absolutely disgusted to be a kiwi! If you can shoot a dog with a bullet, you can bloody shoot it with a tranquilizer 😡😠😠😡😠😡😠 #RIPGrizz