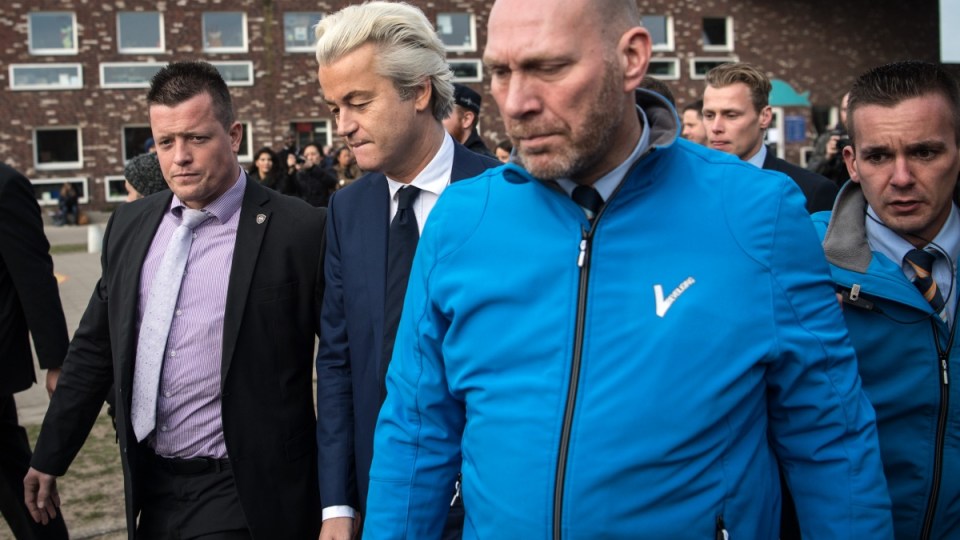 Dutch PM hopeful Geert Wilders (C) says "the genie will not go back into the bottle", as the alt-right gains traction in Europe. Photo: Getty

“It was a festival of democracy with queues outside polling stations. We haven’t seen that for a long time,” a translation of Mr Rutte’s speech wrote, referencing the 31-year-high level voter turnout (82 per cent).

The early Ipsos exit poll indicated Mr Rutte held a 31 to 19 seat lead over Mr Wilders. While exit polls are not definitive reflections of final results, they are considered accurate in Dutch elections.

Final results are expected between 10am and midday on Thursday (AEDT), but reports indicated Mr Wilders’ party The Party for Freedom was the “largest party” in Rotterdam, the Netherland’s second biggest city. 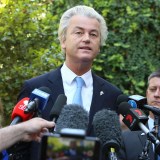 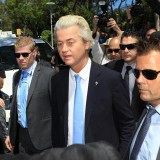 Following the exit poll results Mr Wilders tweeted: “We have won seats! That’s the first victory! I’m not done with Rutte yet!”

Government in the Netherlands is formed in multi-party coalitions, of which Wilders’ party will be excluded.

Earlier, Mr Wilders, leader of the Dutch alt-right Party for Freedom, and the closest challenger to topple two-term PM Mr Rutte, said the face of European politics was to change forever.

The Netherlands election has widely been viewed as a weather gauge of change amid a continent-wide shift to the right and fears of a disintegration of the European Union.

With elections in France and Germany scheduled for later this year already showing unprecedented support for far-right populism, political and financial observers were concerned by the potential of a ‘Trump-style’ shift away from traditional politics in favour of the emerging European alt-right.

“The genie will not go back into the bottle. People feel misrepresented,” Mr Wilders was quoted as saying by The Associated Press as he cast his vote.

“Despite what the elite wants, politicians are getting strong who have a totally different concept of what the people want them to do,” he said.

Mr Rutte portrayed himself as a safe custodian of the nation’s economic recovery throughout his campaign, while he cast Mr Wilders as a far-right radical unprepared to make tough decisions.

With Britain now preparing its exit from the EU and Scotland lobbying for another referendum on its future within the United Kingdom, the Netherlands election appeared to offer the latest threat to an increasingly unstable Europe.

Mr Wilders pledged to follow Britain by taking the Netherlands out of the European Union, as well as closing its borders to immigrants from Muslim nations, shutting mosques and banning the Quran.

France goes to the polls in May, when the far-right National Front led by Marine Le Pen is expected to go to a second round in the presidential election against the conservative Francois Fillon.

Ms Le Pen was one of the first politicians to congratulate Donald Trump on his election in the US, saying the property mogul’s ascension to power “shows that people are taking their future back”.

She is opposed to multiculturalism and has proposed that the children of illegal immigrants in France should be refused access to public schools.

German Chancellor Angela Merkel is tipped to win a fourth term at her country’s September election, but is expected to lose seats as the anti-immigrant Alternative for Germany Party (AfD) has surged in the polls.