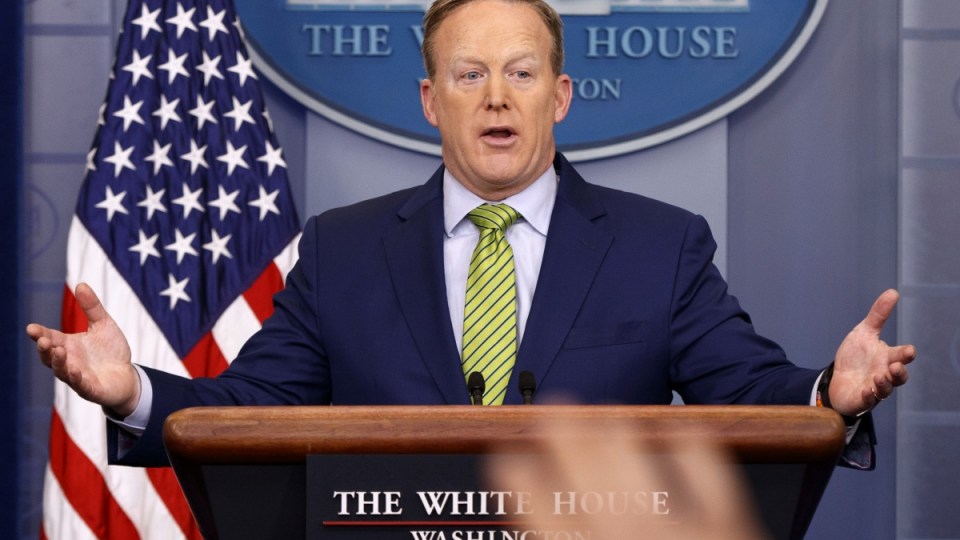 Sean Spicer says Donald Trump's statements on the whereabouts of the USS Carl Vinson were not misleading. Photo: AAP

Two of Donald Trump’s closest advisers have struggled to explain the President’s claim that he was wiretapped by former president Barack Obama, which he made without providing evidence earlier in the month.

Meanwhile, White House adviser Kellyanne Conway said in an interview that covert surveillance can be conducted through “microwaves that turn into cameras etcetera”.

A week after saying he would let Mr Trump’s tweets “speak for themselves”, Mr Spicer has taken it upon himself to give the term “wire tapping” a looser definition.

“If you look at the president’s tweet, he said very clearly, quote, ‘wire tapping’ — in quotes,” Mr Spicer said during a news briefing on Monday (US time).

“There’s been substantial discussion in several reports … There’s been reports in the New York Times and the BBC and other outlets about other aspects of surveillance that have occurred.

“The President was very clear in his tweet that it was, you know, ‘wire tapping’ — that spans a whole host of surveillance types of options.”

Defending the President’s allegations, which are yet to be supported by evidence, Mr Spicer implied that by placing the word ‘wire tapping’ in quotation marks, Mr Trump had been referring to a “whole host of surveillance types”.

In which White House Press Secretary Sean Spicer attempts to explain that “wire tapping” is different from wire tapping. pic.twitter.com/8mry0oMmL0

Despite Mr Spicer claiming that media reports have supported the allegations, the Washington Post reported that the phone calls between recently resigned national security advisor Michael Flynn and Russia’s ambassador to the US were intercepted because the ambassador was wiretapped, not Mr Flynn.

To date, there has been no solid evidence to suggest Mr Trump or anyone else on his team had been bugged.

It also emerged on Tuesday that the Trump administration had requested more time to produce evidence of the Obama administration’s surveillance to a House Intelligence Committee request.

Terrible! Just found out that Obama had my "wires tapped" in Trump Tower just before the victory. Nothing found. This is McCarthyism!

Ms Conway was asked if she knew whether Trump Tower had been wiretapped during the campaign in an interview the New Jersey News.

“You can surveil someone through their phones, certainly through their television sets — any number of different ways — microwaves that turn into cameras etcetera,” Ms Conway said.

Though she was referring to recent claims by WikiLeaks that the CIA was spying through smartphones and television sets, Ms Conway’s suggestion that microwaves were also being used was roundly mocked.

In a later interview on CNN, she said she had been speaking generally about spying rather than directly addressing the president’s claims.

“I’m not Inspector Gadget. I don’t believe people are using their microwave to spy on the Trump Campaign. However, I am not in the job of having evidence. That’s what investigations are for,” she said.

But social media users delighted at Ms Conway’s comment, posting satirical images of their microwaves with “espionage” buttons and digital cameras inside.

Wiretapping is not the same as ‘wire tapping’, says Sean Spicer