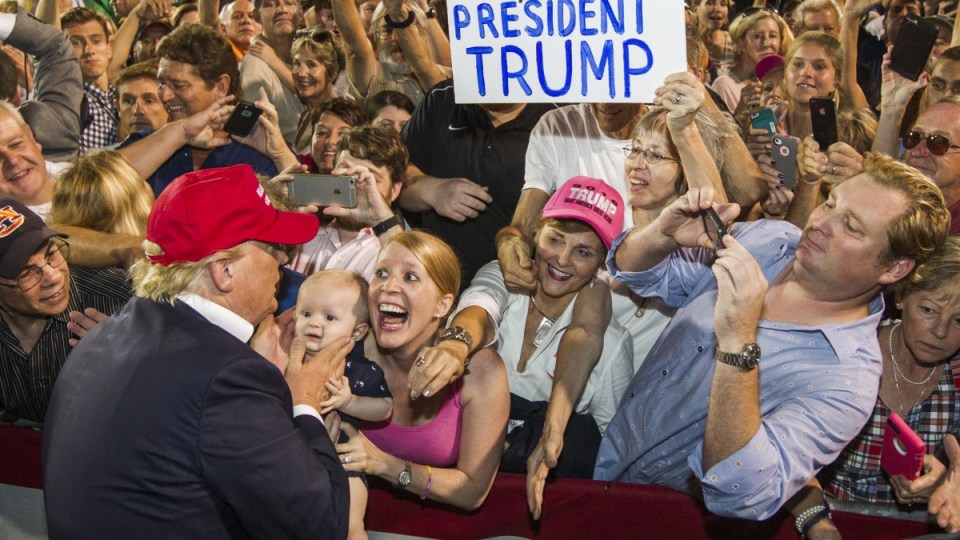 Donald Trump's supporters were overjoyed at his victory, but most of the world was caught unawares. Photo: Getty

The Australian government was seemingly unprepared for the prospect of Donald Trump winning the US presidential race, with government documents saying there were “no signs” he could swing a victory.

Prime Minister Malcolm Turnbull was forced to rely on a personal number provided by golfing legend Greg Norman in the aftermath of the election, because the Department of Foreign Affairs and Trade did not have contact details for Mr Trump’s team.

This was despite a government briefing paper noting that both “Trump and Clinton had established transition teams”.

The department prepared a briefing document for Senator Payne, marked “secret,” and for “Australian Eyes Only”.

Key details of Mr Trump’s foreign, defence and trade policy positions have been redacted, but the document does reveal an assessment of the then candidate’s character.

“Trump is an unprecedented candidate and his ability to manoeuvre and recover should not be underestimated,” it reads.

“Regardless of the outcome, the US will be looking to its allies to do more.”

The briefing pack does contain photographs of key campaign figures and advisers, but the accompanying text has been blacked out.

Senator Payne congratulated the incoming defence secretary after his nomination but then waited about seven weeks before contacting him again, despite trouble brewing over the United States’ stance on the South China Sea.

Then nominee for secretary of state, Rex Tillerson, told the US Senate he wanted to block China’s access to the contested islands, prompting warnings the US could involve Australia in a war with China.

A spokesman for Senator Payne said she contacted General Mattis to congratulate him in early December and again in late January.

“As is usual practice, the government works with the serving US administration of the day,” the spokesman said.

Senior Defence officials had no official correspondence with their new US counterpart General Mattis in the two months after the election, according to the department’s response to the ABC’s freedom of information request.

The US defence secretary visited Canberra in September last year.

At the time, General Mattis was a Visiting Fellow at the Hoover Institution. He was announced as Mr Trump’s pick for defence secretary at a rally on December 1 last year.

‘No signs’ Trump can win

“[Hillary] Clinton is the frontrunner,” the document said.

“However, this lead is narrowing and Trump is competitive in battleground states.

“The electoral map is strongly tilted in Clinton’s favour … Trump, in contrast, would have to dramatically redraw the political map to win.

“So far, there are no signs that Trump will be able to achieve this.

“While Democrats are very positive about a Clinton victory, they see a long fight ahead until Election Day in November.”

The document also credits Mr Trump’s new staff with a small improvement in his polling.

“[Polling improved] when he appointed Breitbart CEO Stephen Bannon as Campaign CEO and Kellyanne Conway as Campaign Manager,” it said.

The Department of Defence denies the briefing got it wrong on Mr Trump’s chance of winning.

“The briefing was not based on any such assumption,” a spokeswoman said.

“Factual polling data was included in the briefing.”