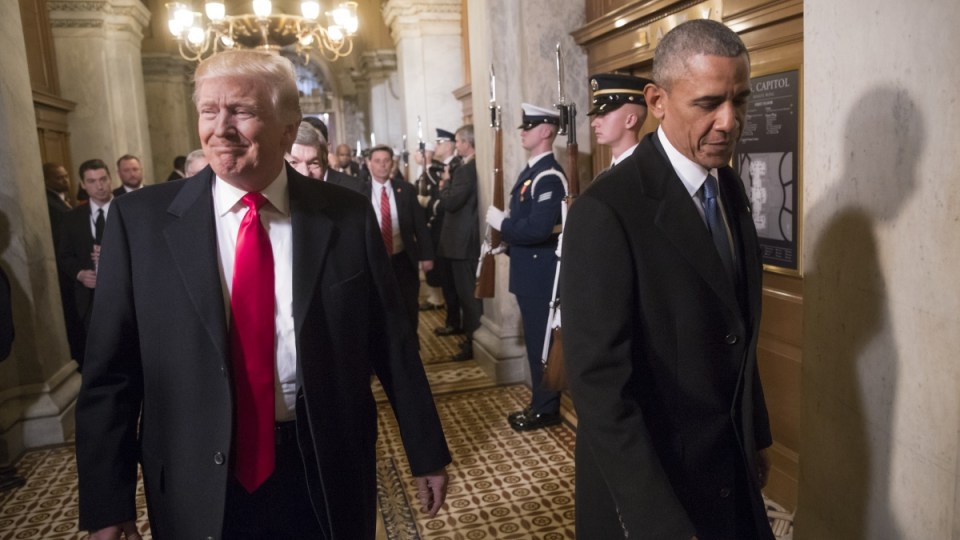 President Trump has described his predecessor, Barack Obama, as ''a bad (or sick) guy''. Photo: Getty

FBI director James Comey has asked the Justice Department to publicly reject Donald Trump’s claims that Barack Obama tapped his phone during the 2016 election, The New York Times has reported.

The Justice Department – led by Mr Trump’s staunch ally Attorney General Jeff Sessions – has reportedly refused to do so. The New York Times said if it or the FBI had publicly rebuked the claims then it would be a “remarkable rebuke of a sitting president”.

Mr Trump has turned to Congress for help in finding evidence to support his unsubstantiated claim that Mr Obama had Trump Tower’s telephones tapped during the election, with the White House saying the issue should be looked at as part of the ongoing congressional probe into Russia’s influence on the US election.

White House spokesman Sean Spicer said Mr Trump or his administration would not comment further until the investigation on the “very troubling” allegations had finished.

“President Trump is requesting that as part of their investigation into Russian activity [that potentially influenced the 2106 election], the congressional intelligence committees exercise their oversight authority to determine whether executive branch investigative powers were abused in 2016,” Mr Spicer said.

Mr Trump was earlier urged by a fellow Republican to put up or shut up about the explosive accusation against Mr Obama.

The US President went on a Twitter spree at about 5.35am on Saturday (US time), comparing the alleged tapping to “McCarthyism” and Watergate, and describing Mr Obama as ”a bad (or sick) guy”.

Is it legal for a sitting President to be "wire tapping" a race for president prior to an election? Turned down by court earlier. A NEW LOW!

I'd bet a good lawyer could make a great case out of the fact that President Obama was tapping my phones in October, just prior to Election!

How low has President Obama gone to tapp my phones during the very sacred election process. This is Nixon/Watergate. Bad (or sick) guy!

He offered no explanation or evidence to support his claims, but on Thursday, a conservative radio host made claims about alleged steps taken by the Obama administration to influence the election.

Those comments were followed by right-wing news outlet Breitbart, which published an article claiming the Obama administration eavesdropped on the Trump campaign.

A senior White House official told The New York Times that White House chief counsel Donald McGahn was seeking access to an order issued by the Foreign Intelligence Surveillance Court authorising some form of surveillance related to Mr Trump and his associates.

The accusations drew a swift response from Kevin Lewis, a spokesperson for Mr Obama.

“Neither President Obama nor any White House official ever ordered surveillance on any US citizen. Any suggestion otherwise is simply false,” Mr Lewis said in a statement on Saturday.

“A cardinal rule of the Obama Administration was that no White House official ever interfered with any independent investigation led by the Department of Justice.”

A cardinal rule of the Obama Administration was that no WH official ever interfered with any independent investigation led by the DOJ. pic.twitter.com/c5QD50nXac

Former Obama advisor Ben Rhodes also strongly denied Mr Trump’s allegations, posting on Twitter that it is impossible for a US president to do so.

No President can order a wiretap. Those restrictions were put in place to protect citizens from people like you. https://t.co/lEVscjkzSw

Director of national intelligence under Mr Obama, James Clapper, told NBC he had no knowledge of the alleged wire-tapping.

“There was no such wire-tap activity mounted against the president-elect at the time as a candidate or against his campaign,” Mr Clapper said.

In Mr Trump’s same burst of tweets he defended Jeff Sessions, the US attorney general facing scrutiny over his meeting with the Russian ambassador to Washington during the 2016 presidential election campaign.

And while he was in the mood for handing out clips, he followed up with one about his former TV Show, The Apprentice:

Arnold Schwarzenegger isn't voluntarily leaving the Apprentice, he was fired by his bad (pathetic) ratings, not by me. Sad end to great show