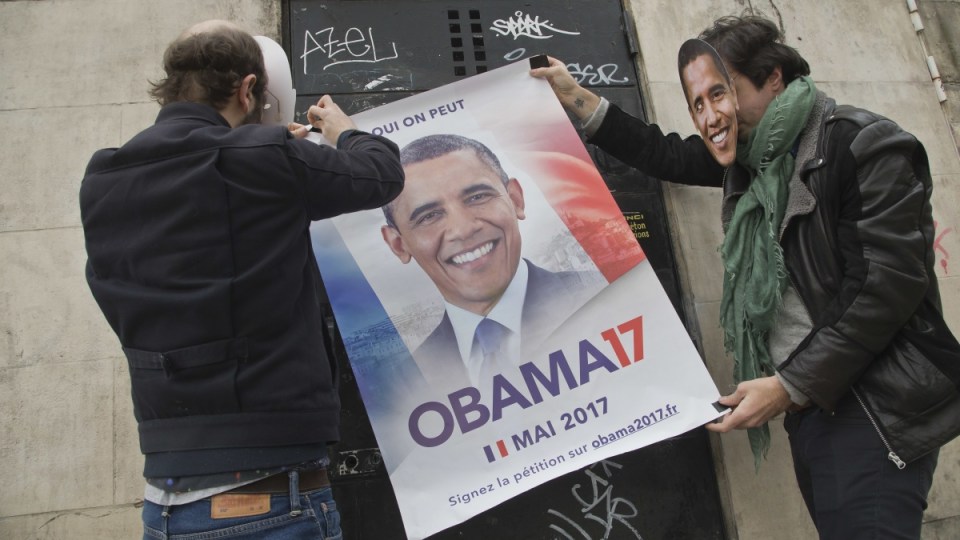 Two organisers of the online petition, wearing Barack Obama masks, stick up a campaign poster that reads "yes we can" in French. Photo: AAP

The slogan on posters in Paris streets translates as “Yes We Can!”

The people behind the campaign are urging former US President Barack Obama to join the French presidential race.

Their online petition has already attracted more than 45,000 signatures in 10 days and they hope to reach a million supporters by March 15. 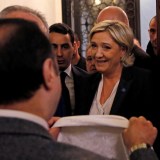 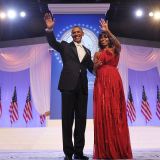 Why the Obamas have 78 million reasons to smile

With the build-up to the April-May presidential election so far dominated by the corruption investigation targeting conservative Francois Fillon, organisers say they want to inject a dose of humour in the campaign.

The whole thing started as a big joke between friends, one of the organisers said. He identified himself only as “Antoine”, declining to give his real name because the posters have been put up illegally and he feared a fine.

Antoine, interviewed in Paris with his face covered by a cut-out mask of Obama, said that he and his friends decided on the campaign over a drink, after realising they didn’t know for whom they would vote.

Antoine said he had printing 500 posters. The team has also had mugs and T-shirts made with the image of Obama, which they are selling on their website.

They say the profits will go to a scholarship fund for students from poor neighbourhoods attending classes at Sciences Politiques, one of France’s most prestigious universities.

Though widely popular in France, Obama has no chance of success. He is not French and has no right to take part in the race.

Sarah Wachter, an American who has lived in France since 1999, sees the petition as a positive sign for France.

“But I think that Obama has done that in the United States.”