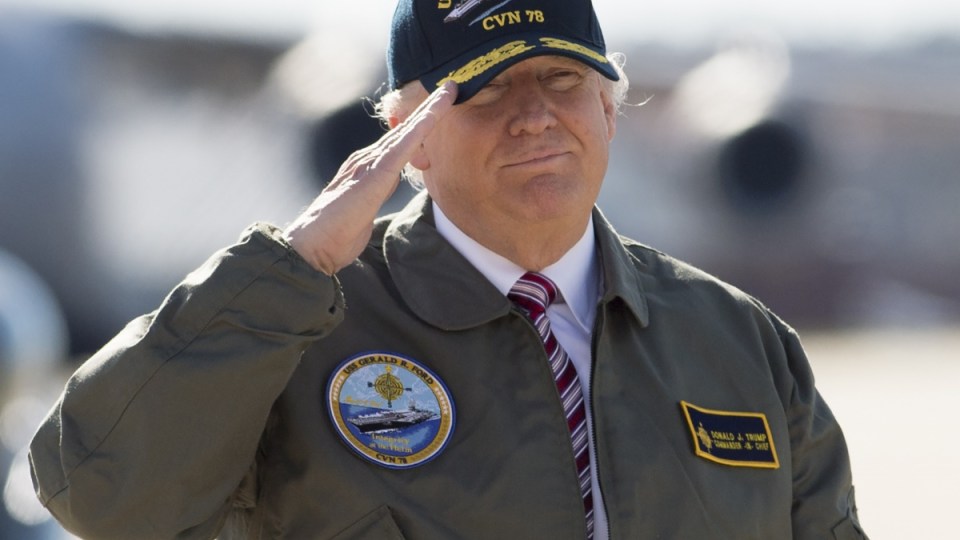 United States President Donald Trump – who deferred Vietnam War conscription five times – has angered army veterans by wearing an admiral’s cap and flight jacket during a speech on an aircraft carrier in Florida.

Mr Trump wore the jacket and cap emblazoned with the words “USS Gerald R Ford” – on the ship of the same name – on Friday morning (AEDT).

The President was gifted the outfit by the the aircraft carrier’s crew. They personalised the clothes with the phrase “POTUS 45”. The appearance caused controversy among military veterans, but that didn’t seem to bother the billionaire.

“They [the crew] said, ‘Here Mr President, take this home.’ I said, ‘Let me wear it’,” Mr Trump said at the beginning of his speech, causing laughter in the crowd.

“And then they gave me the beautiful hat, and I said, ‘You know? Maybe I’ll do that.'”

“We have a great ‘Make America Great Again’ hat, but I said, ‘This is a special day, we’re wearing this.'”

But not everyone shared Mr Trump’s pride at him donning the clothing. Hundreds of veterans and US citizens criticised their president online.

As a vet, I am appalled to see draft-evading #trump donning a military cap & jacket on a naval aircraft carrier!Insult to navy seal who died

Did anybody else find it extremely offensive that draft-dodger chump was wearing that flight jacket & admirals hat? #TheResistance #veterans

In August 2016 the New York Times reported on Mr Trump’s five deferments from Vietnam War service in the 1960s.

At 22-years-old and fresh out of college Mr Trump was able to dodge service because of bone spurs in his heels. In that same year of 1968 some 300,000 American men went into the military.

Trump isn’t the only one

University of Melbourne researcher and US politics expert James Cahill told The New Daily that the issue of presidential protocol in relation to the armed forces was always contentious in the US.

“People have been interested in the past with how a commander in chief [the President] represents the military,” Mr Cahill said.

“People often ask ‘do they show proper protocol in and toward the military?’.”

One of those examples was this column by a retired Air Force Lieutenant Colonel, attacking former President Barack Obama for wearing an Air Force One flight jacket.

“Please, President Obama (and all future presidents): Put away the flight jackets and other militaria when you address our troops,” retired Lt Col Professor William Astore wrote in The Huffington Post.

“Appear as the civilian commander-in-chief that you are. By doing so, you remind our troops that they are citizens first, and soldiers, Marines, sailors and airmen second.”

Mr Bush was eventually honourably discharged from the Texas Air National Guard and the Air Force Reserve in 1973 and 1974 respectively.