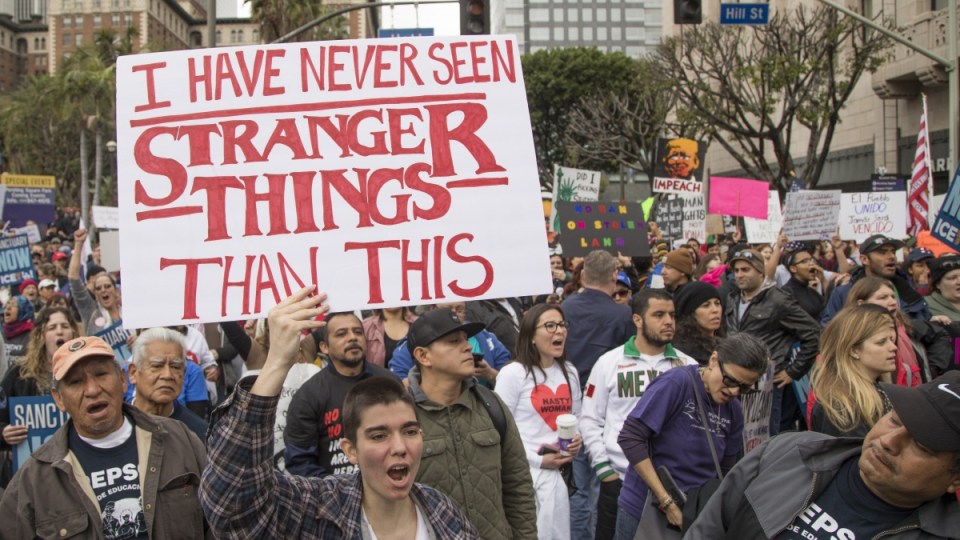 Californians have turned out in their thousands to protest their new president. Photo: EPA

An independent California would be a progressive powerhouse that could rival the world’s largest economies, according to supporters of a growing breakaway movement.

With the President’s hardline immigration policies and climate skepticism considered an anathema to the West Coast’s diverse, progressive population, two political movements are fronting an emboldened push for California to secede from the union.

The California National Party, modelled on Scotland’s SNP, sees itself as part of a proud Californian independence tradition.

‘A nation unto itself’

“California really is a nation unto itself. Californians share a common history, culture, ecology, and values – which are markedly different from the rest of the country’s.”

Figures show California currently boasts the sixth-largest economy in the world, with $3.21 trillion ($US2.46 trillion) in annual GDP. That eclipses economic giants such as France and India and is double that of Australia. With a population of 39 million, the state is home to San Francisco’s Silicon Valley tech community, Hollywood in Los Angeles and its tourism industry is worth $122.5 billion.

“Meanwhile, states like Mississippi and Wyoming get $2-$4 back for every $1 they pay.”

Only 5 countries have a larger #GDP than #California (say it in your Arnold Schwarzenegger voice) #economy #money #investing #wealth pic.twitter.com/0MjjOTNTwU

The electoral college system, used to elect the president, was also a reason for an independent California.

“For all the talk about our electoral votes being so pivotal, we actually haven’t changed the outcome of a presidential election since 1880,” Mr Rooney said. Hillary Clinton won the state by about 30 points in November.

At the same time, another movement, Yes California, is working to achieve independence through the state’s ballot initiatives process.

It is scrambling to collect 585,407 signatures by July that would let Californians next year vote on changes to the state’s constitution needed to facilitate independence.

If that vote is successful, it would trigger a 2019 special election to ask whether California should “become a free, sovereign and independent country”.

Both movements say their numbers have grown since the election of Mr Trump.

“I do believe Californians and the West Coast overall share these common liberal values more so than the Midwestern culture that I left behind,” she said.

But it was also forced to deny it was being supported by the Russian government after the campaign’s president, Louis J Marinelli, moved to Moscow and established an “embassy” there.

Constitutional law experts, meanwhile, are not convinced there is a viable path to secession, pointing to the Civil War, where 11 Southern states unsuccessfully tried to leave the Union over slavery.

Last month, a Reuters/Ipsos poll found a third of Californians supported a “peaceful withdrawal from the union”.

“Trump’s election has thrown into stark contrast the way Californian values have so greatly diverged from American values,” Mr Rooney said, though he added that the movement was “not about” the new president.

He was confident independence could be won through “non-violent” means at the ballot box.

“The rest of the country has viewed [Californians] with perplexity at best and contempt at its worst,” he said.

“So it makes sense to split – call it ‘irreconcilable differences’.”

An independent California? In the age of Trump, some want just that