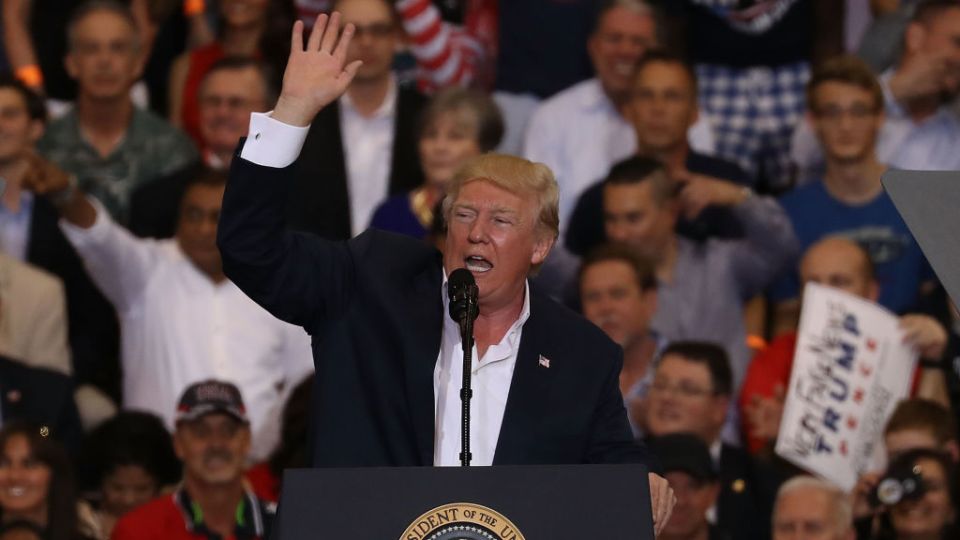 In spite of taking a bath over his unverified Sweden terror claims, US President Donald Trump has today backed himself up in a tweet.

Give the public a break – The FAKE NEWS media is trying to say that large scale immigration in Sweden is working out just beautifully. NOT!

Donald Trump has once again become a target of social-media parody after his claims about a non-existent terror attack in Sweden.

At a weekend rally in Florida — his first as president — Mr Trump vehemently defended his travel ban, and mentioned Sweden in a list of countries that have experienced recent terror attacks.

Mr Trump did not specify what incident he was referring to, which left many Swedes baffled and its Washington embassy “trying to get clarity” from the White House.

But White House principal deputy press secretary Sarah Sanders said Mr Trump was referring to “rising crime and recent incidents in general, and not referring to a specific incident”.

Mr Trump later tweeted to confirm he was referring to a Fox News report which drew a link between rising crime and refugee admissions in Sweden.

My statement as to what's happening in Sweden was in reference to a story that was broadcast on @FoxNews concerning immigrants & Sweden.

But the misstep sent social media into a frenzy, with not just a dedicated hashtag, #lastnightinSweden, but also its own Twitter account, Last Night in Sweden — with some hilarious results.

The border wall if made by IKEA pic.twitter.com/YyL5FyxN3K

Sweden? Terror attack? What has he been smoking? Questions abound. https://t.co/XWgw8Fz7tj

‘That’s how dictators get started’

Meanwhile, Senior Republican Senator John McCain sent a warning aimed directly at President Trump and his rages against the media, saying “that’s how dictators get started”.

Senator McCain is a Trump critic, but went further to distance himself while on a trip to Germany for the Munich Security Conference. He broke with the party line to say the administration is in “disarray”.

Mr Trump has labelled journalists “the enemy of the American people”, branding a long list of mainstream media outlets as “fake news”.

Senator McCain told NBC’s Meet the Press that if you want to preserve democracy as we know it, you have to have a free and many times adversarial press.

“I hate the press. I hate you especially,” Senator McCain joked to host Chuck Todd. “But the fact is we need you. We need a free press. We must have it. It’s vital.”

The Arizona Republican cautioned that he was not accusing Mr Trump of trying to be a dictator. He made the comments during a discussion of the post-World War II world and America’s role in it.

“They get started by suppressing free press,” Senator McCain said of dictators.

“In other words, a consolidation of power when you look at history, the first thing that dictators do is shut down the press. And I’m not saying that President Trump is trying to be a dictator. I’m just saying we need to learn the lessons of history.”

Even Chris Wallace, anchor with conservative outlet Fox News, took offence at Mr Trump’s comments in what was seen as a stunning rebuke for the Trump attack.

In an interview with White House Chief of Staff Reince Priebus, Wallace defended a free press.

“You don’t get to tell us what to do any more than Barack Obama did,” Wallace said after continued arguments with Mr Priebus.

“Barack Obama whined about Fox News all the time, but I got to say, he never said that we were an enemy of the people.”

‘I am not afraid’: The modern unknown soldier risks it all in Ukraine
Energy market reform will be a big boost for emissions reductions: Chris Bowen
Greens sign up for Labor’s looming jobs-and-skills summit as Liberals stick with boycott
Joe Biden’s $430b green victory for the environment
China cementing its Thailand ties with joint military exercises
NRL: Titans frantic to end 10-game losing streak as Manly showdown looms
Another Trump national security official fired
Today's Stories