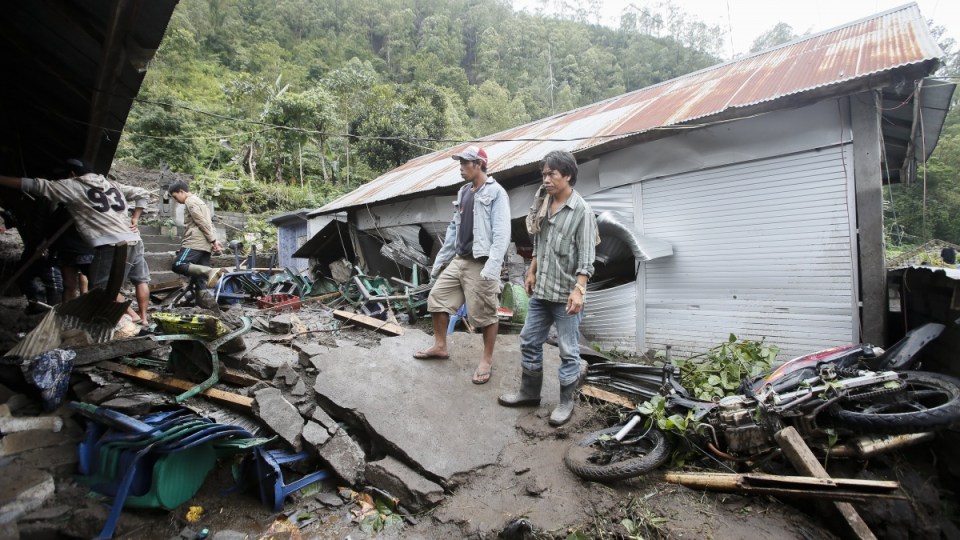 Villagers survey the damage after a landslide in Bangli, Bali. Photo: AAP

Twelve people, including at least two children, have been killed in a series of landslides across Bali as heavy rain continues to inundate the popular tourist destination, emergency services say.

A one-year-old boy, his seven-year-old sister and their mother were among seven people who died in Songan Village in northeast Bali when a landslide occurred at around 11pm local time (2am AEDT) on Thursday.

The scene of the fatal landslide in Songan village in Bangli regency of Bali. Seven killed, two seriously injured pic.twitter.com/CVXPT0jBT1

Gde Mangun, owner of Bali Sunrise Villa in Songan, said the area – at the foot of Batur volcano – was once forested but recently has been cleared for a plantation.

“I think that’s one factor that when rain falls constantly, it causes a landslide,” he said on Friday.

“(We are) very sad about last night’s incident. In the future, we hope there is land rehabilitation.

“There’s also sand mining in Songan. That could affect the land when heavy rain falls.”

The disaster board has warned that heavy rain is likely to continue to fall on the region and has warned people to be cautious of landslides, floods and hurricanes.

In September last year, President Joko Widodo said illegal mining and land clearing have been major contributors to the death toll of landslides and flooding in West Java.

The worst-affected area of flooding and landslides in the region killed at least 34 people in mid-September and left more than 6300 people living in shelters.

Twelve killed by landslides in Bali