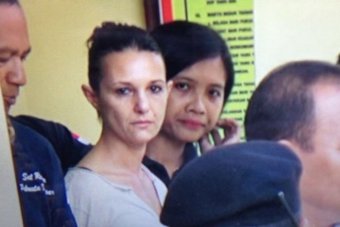 Australian woman Sara Connor says the testimony of her British boyfriend confirms the “truth” of what she always said happened the night they allegedly killed a Bali police officer.

“I can’t wait for this (the case) to finish now,” she told reporters, adding she hoped to go back to her two sons soon.

Taylor, 35, and Connor appeared to make no eye contact after he was sworn in ahead at the trial of his Australian girlfriend at Denpasar Court on Tuesday.

The couple, who are being held at Kerobokan prison, face charges of murder, fatal assault in company and assault causing death, with prosecutors alleging they attacked Bali police officer Wayan Sudarsa on the night of August 16 and left his lifeless body on Kuta Beach.

Taylor told the court he and the mother-of-two from Byron Bay, NSW, were friends before becoming an item in April last year.

The night Connor, 46, arrived in Bali on August 16, they watched the sunset on Kuta Beach and went to dinner, he said. 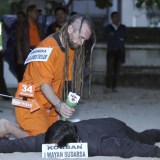 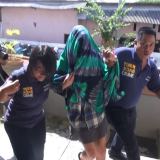 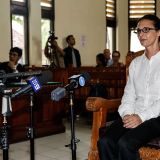 They later returned – beers in hand – and “relaxed” near the water’s edge for a number of hours before noticing Connor’s bag was missing.

Taylor told the court he had become “suspicious” of Mr Sudarsa, who had been milling about, and questioned him about the bag.

Mr Sudarsa told him he was a police officer and allegedly laughed when Taylor asked for help.

“I thought, ‘This man could’ve done something’. Then I searched him, his pocket, under his jacket and his trouser pocket,” Taylor said through an interpreter.

Mr Sudarsa struck out at him, Taylor said.

The pair “wrestled” before Connor came over and tried to separate them.

At one point, Taylor said Connor was “screaming”, while Mr Sudarsa was grabbing her hair.

After his evidence finished, Connor told reporters the testimony confirmed the “truth” – that her only involvement was “separating them”.

She said they didn’t know Mr Sudarsa was seriously hurt when they left him.

“I tried to go to police to report him because I was upset that somebody attacked me.”

Last week, security officer Suryana described seeing Mr Sudarsa’s body on the sand later that morning, saying: “He was without his left shoe and his left leg was scratched … His face was covered with blood and sand.”

Connor and Taylor will return to court next week.