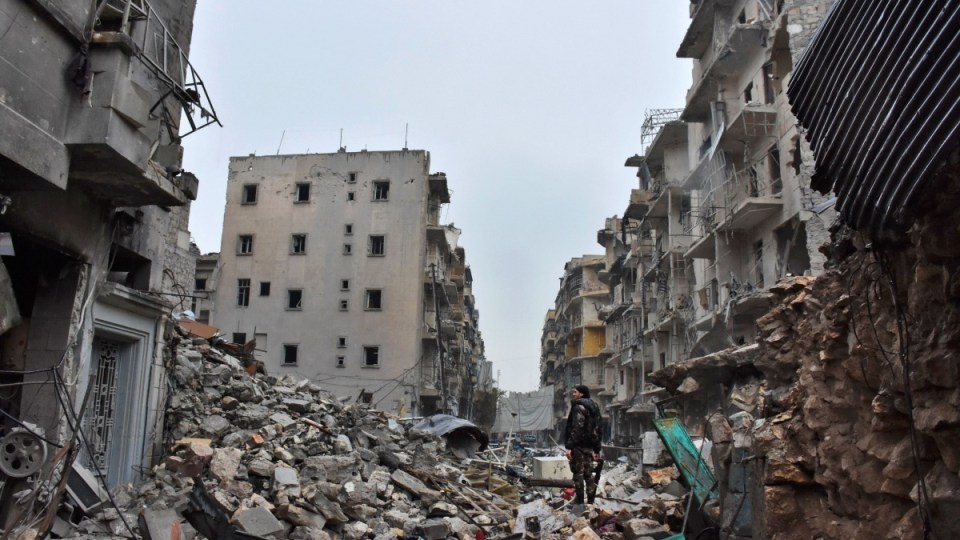 Aleppo, a once mighty and populous city, lies in complete and utter ruin. Photo: Getty

Several children are among the estimated 3000 civilians who have scrambled to get out of the last rebel-held enclave in eastern Aleppo.

Women and the injured were also among the first batch of evacuees from the besieged city, with the process expected to continue for days.

Hundreds of rebels are also believed to have left.

Syrian state TV showed footage of ambulances and a long line of green buses leaving the city as part of an agreed ceasefire.

“Many more” rotations of the buses and ambulances would be needed in coming days, Robert Mardini from the International Committee of the Red Cross said.

He said the operation would be ongoing. 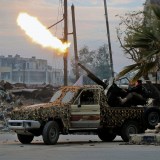 ‘We have lost a generation of Syrian children’: Army poised to take Aleppo

“This for us is the first step, it was a positive one,” he said.

The Red Cross said some 3000 civilians and more than 40 wounded people, including children, were evacuated from east Aleppo in two evacuations.

The evacuation of eastern Aleppo is underway, with two convoys of fighters and civilians from the last rebel–held areas of the city leaving on a stream of buses and ambulances.

A senior Turkish official told Reuters it will take two to three days to clear the city, with around 50,000 people expected to be evacuated.

Syrian state television reported that the first convoy of evacuees had reached the town of al-Rashideen, which is held by insurgents just outside the city.

Once they are in opposition–controlled areas they can chose where they want to go.

The operation is being overseen by the Turkish Red Crescent, which is helping to set up a camp in Idlib to host refugees.

A team of 14 International Red Cross staff and nearly 100 volunteers from the Syrian Arab Red Crescent (SARC) also took part in the operation.

Syrian authorities conducted only “very light screening” of the evacuees, who were not registered and whose identity papers were not checked, he said.

The evacuation had earlier stalled as ambulances taking wounded rebels and civilians out were reportedly fired upon on Thursday night (AEST).

Meanwhile a trumphant Syrian President Bashar al–Assad has sent out a video message saying history is being made by the “liberation” of Aleppo.

🇸🇾✌️Syrian President Bashar Al Assad with a message on the liberation of Aleppo today (15/12/2016) pic.twitter.com/ebZ4LoznKv

Syrian government forces took control of Aleppo on Wednesday morning (AEDT), finally defeating a coalition of rebel forces that had held the city’s east since early 2012.

While it is unclear when the bloodshed in Aleppo will finally end, here’s an explanation of how and why it began.

Why the Aleppo conflict began

The Syrian Civil War began in March 2011 and has mainly pitted Syrian forces – led by President Bashar al-Assad – against the separate forces of Islamic State and rebel Syrian fighters.

In March 2011, mass demonstrations began in the Syrian capital Damascus against Assad’s regime.

Protests spread across Syria, and in February 2012, demonstrators in Aleppo were shot and bombed by Assad’s forces.

Rebel groups then advanced on Aleppo.

This advance was not decisive, but resulted in a situation where rebel forces controlled east Aleppo and government forces the city’s west.

Why Aleppo is important

Before the war, Aleppo was a key economic hub in Syria. It was also its most populous city.

The city’s recapture is considered vital to Assad’s hopes of ever definitively controlling Syria again.

The rebel forces are anti-government groups.

The rebels are mainly made up of the Free Syrian Army, Ansar al-Sharia, Jabhat Fateh al-Sham (formerly known as Al-Nusra Front) and Jabhat al-Din.

Saudia Arabia, Turkey and Qatar are supplying the rebels, with the United States also providing supplies.

Assad’s Syrian government forces are backed by Russia and Iran.

Most of the fighting between early 2012 and Wednesday’s ceasefire agreement was characterised by deadlock.

The momentum continually swayed back and forth.

In July 2016, Russia began airstrikes on Aleppo that severed the rebels’ last remaining road into the east.

This allowed Assad’s troops to essentially surround the rebel forces.

Also surrounded were a further 250,000 people remaining inside east Aleppo.

In November 2015, Syrian government forces recaptured more than a third of the rebel’s territory in eastern Aleppo.

By December 12, it was estimated by monitor groups that the rebels had lost 90 per cent of their territory and on December 13 (local time) the first ceasefire was struck, with the second and latest reached on December 15.

During most of the five-year battle, Assad would not allow humanitarian aid to be regularly delivered to east Aleppo.

Tens of thousands of civilians have been killed in the city since the fighting began.

On Wednesday (AEDT), the UN reported 82 civilians had died in the final surge for Aleppo, including women and children. It’s feared that number will rise.

The UN’s humanitarian spokesman Jens Laerke described the killings as ”a complete meltdown of humanity in Aleppo.”

Hundreds of civilians in east Aleppo took to social media to post goodbye videos and messages before Syrian government forces took control of their area.

Russian bombing in November destroyed all the remaining hospitals in eastern Aleppo, according to the World Health Organisation. In that same bombing Al Jazeera reported a barrel bomb killed a family of six and rebel shelling killed eight children at a school.

– with ABC, AAP and agencies

The crisis in Aleppo: who’s fighting who and why