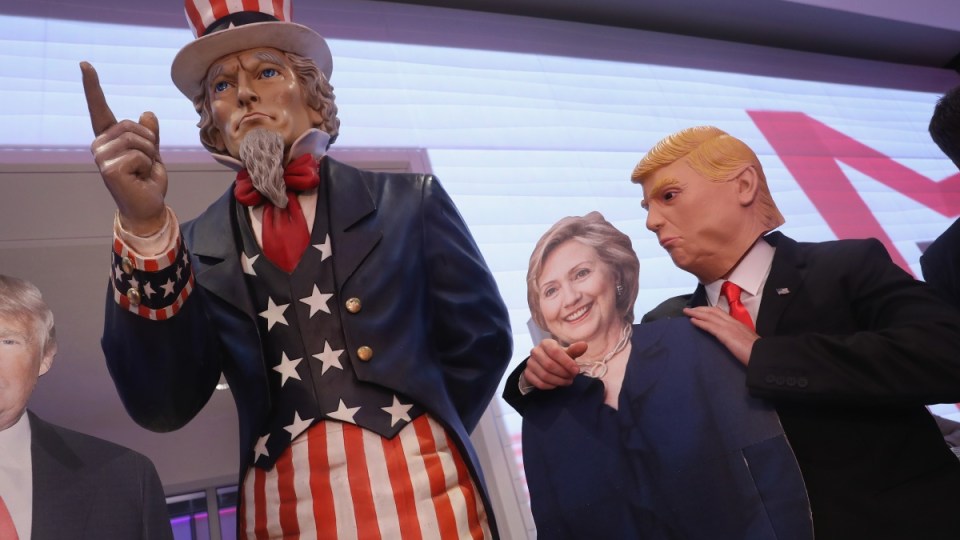 A guest dressed as Donald Trump clowns with a cardboard effigy of Hillary Clinton at a US election party. Photo: Getty
analysis

In the season finale of the reality TV sensation that has been the US presidential race, Donald Trump has emerged as victor. And so this is the article I didn’t really expect to write.

For, like all great reality show finales, the ending had a surprise twist.

We’ve watched for the past two years as Trump rose through the political ranks, and many were incredulous when he became the Republican nominee.

But so many of the polls leading up to the election seemed to suggest he was not likely to win. So what were the voters thinking that the polls couldn’t predict? 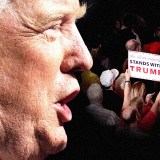 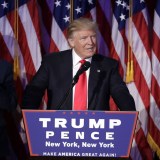 Now it’s time to ‘bind the wounds of division’

Did the polls underestimate the number of hidden Trump voters? Did they overestimate Clinton’s popularity among women and minority group voters?

Or, did the media and the polls focus too much on the apparent disgust directed towards Trump, and neglect the disappointment many felt towards Obama?

Because when people are desperate and there’s a choice between more of the same, or something different, anything seems better.

The exit polls, contentious as they may be, provide some insight: 62 per cent believed that the country was on the wrong track. Of those, 69 per cent voted for Trump.

When asked which candidate quality mattered the most, 39 per cent of voters said they wanted a president who could bring about change. Of those, 83 per cent voted for Trump.

It seems many were perhaps unaware of how unhappy these US voters were with their leadership. 45 per cent of voters disapproved of Barack Obama as President. 47 per cent felt that Obamacare went too far. 48 per cent felt that the next president should be more conservative.

Almost of all these people voted for Trump.

Perhaps this is what put Hillary Clinton at a much greater disadvantage than previously thought – it seems she inherited the distaste many Americans felt for President Obama.

When people feel unhappy with their current state of being, they’ll do almost anything within their power to change it.

Why do people choose change?

Simply, because a change in circumstance is preferable over continued misery. ‘

You’re all familiar with the phrase “the grass is greener on the other side” – the idea that we always seem to want what we don’t have.

There’s a psychological term that’s pretty similar. It’s called the ‘focusing illusion’, and it’s the tendency to overestimate the impact that a single factor will have on our happiness.

This exact phenomenon was explored in a 1998 study by University of Texas Professor David Schkade and his colleague, Nobel prize winner Daniel Kahneman at Princeton University to demonstrate the focusing illusion.

The authors note that “when attention is drawn to a possibility of a change in any significant aspect of life, the perceived effect of this change on wellbeing is likely to be exaggerated”.

American voters were desperate for change. They wanted disruption. They needed an alternative.

Unfortunately, the research suggests that the excitement that this disruption brings may likely be short-lived.

Actual change brings more stress and tension than our perceptions of change allow us to consider.

The good news for Clinton supporters is that in the same way we’re no good at predicting what will make us happy, we tend to overestimate the perceived impact of unpleasant events on our wellbeing, and underestimate our own capacity to cope.

US Election 2016: Why this change might not be better than a holiday