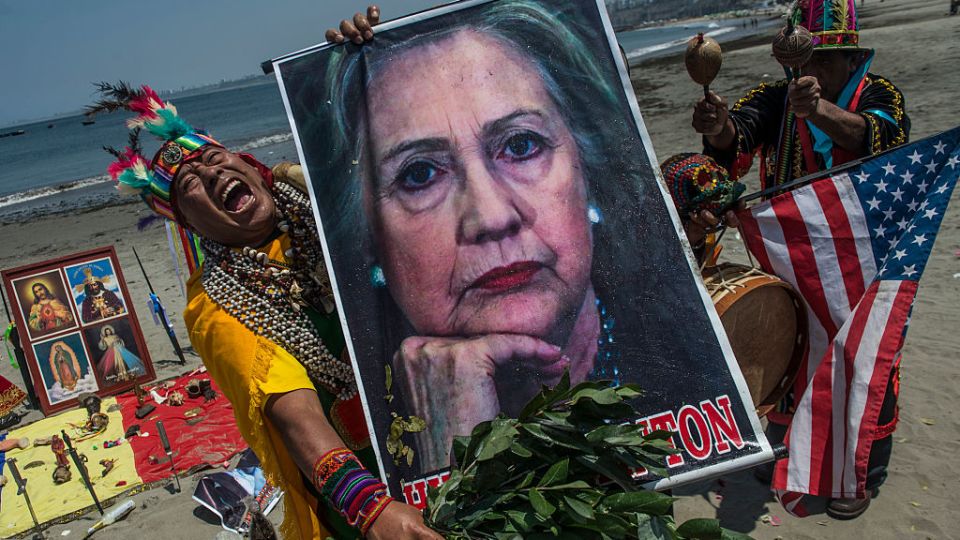 Shamans perform a ritual of predictions for the upcoming US election with posters of presidential candidates Donald Trump and Hilary Clinton at the Agua Dulce beach in Lima, Peru. Photo: Getty

It is the question on the lips of every United States citizen as this volatile presidential election campaign comes to a close.

Republican nominee Donald Trump’s supporters are bullish, and wildly optimistic as he rides a wave of improved polls into election day.

The backers of his Democratic rival Hillary Clinton are nervous, and simply want it to be over, and won.

Right now Ms Clinton’s poll numbers appear to be stabilising and perhaps slightly rising, but the national margin remains wafer thin at around 2.5 points, according to polling averages.

Mr Trump is challenging her in unusual places, like New Hampshire, a Democratic firewall state where the candidates are effectively tied.

And he is pushing into predominantly white states like Michigan, where he sniffs vulnerability despite her almost five-point lead.

At the same time she is reaping the benefits of the Clinton campaign ground game with a strong turnout among early voters, particularly among Latinos in key states like Florida and Nevada.

Polls have tightened over the past fortnight and the FBI’s decision to review its investigation into whether there was any criminality in Ms Clinton’s use of a private email server certainly put the pressure on the Clinton camp.

Ms Clinton’s lead has more than halved from 11 points to just four in the most recent NBC News/Wall Street Journal poll, but she has an average lead of 2.5 in national polls.

Notably that has risen from a low of 1.6 over the past couple of days.

Indeed, the polls remain disparate — some show Ms Clinton up five points, others have Mr Trump up by the same.

Mrs Clinton is still the favourite to win the election although it promises to be tight.

That puts Ms Clinton just a couple of states away from victory.

Mr Trump has repeatedly promised to expand the electoral map — and his final days of campaigning could be read as bold or simply chaotic.

However, Mr Trump is hoping to flip traditionally blue states made up of white, blue-collar workers, disaffected by the loss of manufacturing jobs in America.

Both candidates have made last minute trips to Michigan, suggesting the traditionally strong Democratic state is potentially in play.

Mr Trump is also making a late push in Wisconsin.

Clinton maintains slim lead over Trump in the final hours