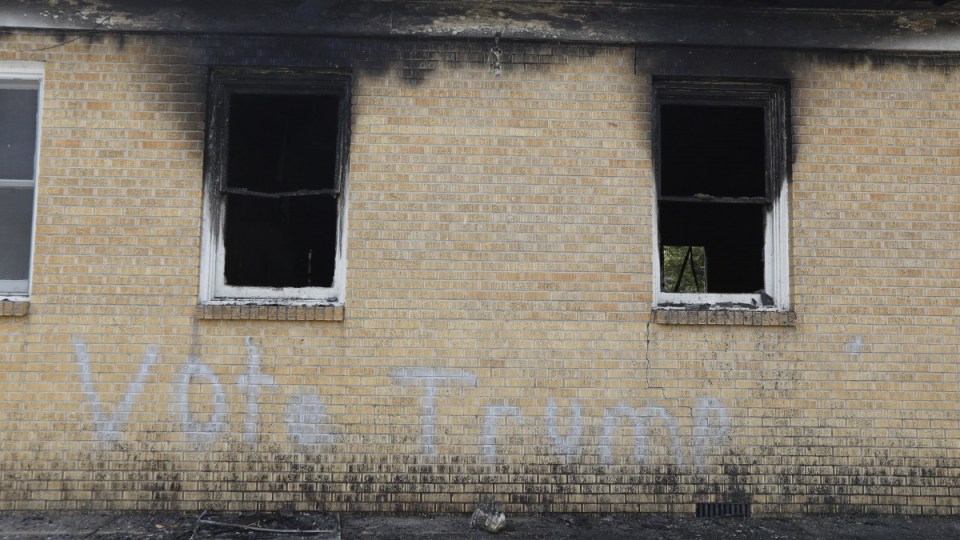 Authorities are treating the attack as a hate crime. Photo: AAP

A historic black church in Mississippi has been burned and spray-painted with “Vote Trump”.

Authorities are treating the attack as a hate crime one week before the US presidential election, on the same day a Ku Klux Klan newspaper endorses Donald Trump.

“Samples and evidence have been collected from inside the church and are being analysed to determine the accelerant or ignition source,” Brown said.

No one was injured in Tuesday’s fire but but the church was extensively damaged, he said.

“We feel that the quote on the church is intimidating.

“It tries to push your beliefs on someone else, and this is a predominantly black church and no one has a right to try to influence the way someone votes in this election.”

Black churches in the US South have long been a base of support for the Democratic Party.

During the US civil rights movement of the 1950s and 1960s, southern black churches were often targets for arson and bombings by white supremacists.

A Ku Klux Klan newspaper has declared support for Donald Trump’s Republican run for US president, saying America became great because it was a white, Christian republic.

The Crusader, one of the white supremacist group’s most prominent publications, published a lengthy endorsement and defence of Trump’s message on the front page of its current issue under the headline: Make America Great Again.

The Trump campaign rejected the group’s support. In a statement, campaign spokesman Steven Cheung said: “Mr Trump and the campaign denounces hate in any form.

“This publication is repulsive and their views do not represent the tens of millions of Americans who are uniting behind our campaign.”

The KKK is the oldest white supremacist group in the US, tracing its roots back to the Reconstruction period in the South that followed the Civil War.

In addition to anti-black views, it has expressed anti-Semitic, anti-immigrant and anti-gay views and, until recently, was anti-Roman Catholic.

Earlier this year, former KKK leader David Duke, of Louisiana, voiced support for Trump, saying white people are threatened in the US and that he hears echoes of his views in Trump’s rhetoric.

Trump drew criticism in February for failing to quickly disavow support from Duke.