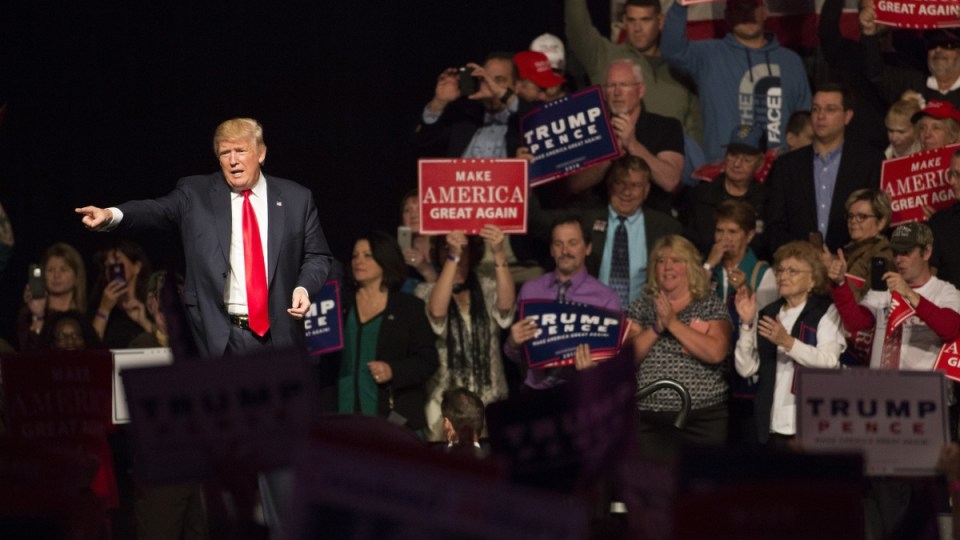 Donald Trump supporters are among the growing number of conservative Americans who are furious with Starbucks for unveiling its new “Unity Cup” design.

Starbucks would not disclose whether the Unity Cup was the much-anticipated annual Christmas cup, with CEO Howard Schultz only saying the design was a response to “a divisive time in our country”.

However, Starbucks did re-introduce its Christmas-themed drinks the same day the Unity Cup debuted.

With the US election just under a week away, Mr Trump’s supporters and other conservative figures have been enraged by Starbucks’ move.

They have judged the cup as a direct attack against the billionaire.

Friends, baristas, and customers drawn in one continuous line—reminding us we're all connected. 💚 pic.twitter.com/qspqJc8KWB

And here’s the reaction:

@Starbucks Screw you. My coffee should NOT (and does NOT) come with political brainwashing. I dropped @Starbucks like a hot rock.

Why are Trump voters angry with Starbucks?

Starbucks’ inclusiveness mantra, or its want to fight the “divisiveness” Mr Schultz mentioned, likely angered them because of the way the billionaire has campaigned.

Mr Trump has sought to demonise Mexicans and Muslims. He has pledged to build a wall to keep Mexicans out of the US and threatened to ban all Muslim immigration to the US.

He has also been deemed disrespectful to women – both his rival Democratic candidate Hillary Clinton and numerous sexual assault accusers.

During Mr Trump’s bid to become the Republican nominee in November 2015, he attacked Starbucks for removing all Christmas symbols (save for the colour red) from that year’s Christmas Cup.

“I have one of the most successful Starbucks, in Trump Tower. Maybe we should boycott Starbucks? I don’t know. Seriously, I don’t care,” Mr Trump said at the time. “If I become president, we’re all going to be saying ‘Merry Christmas’ again, that I can tell you.”

Despite these controversies and more, Mr Trump has maintained a loyal, vocal and combative following, who in this case are furious with Starbucks.

But it isn’t just Mr Trump’s following that has attacked Starbucks this year.

Those who like to celebrate Christmas – traditionally Christians – are unhappy, because some think the Unity Cups are also the 2016 Christmas Cups (many of Mr Trump’s supporters are also Christians, for the record).

@Starbucks how did the holiday spirit become a political agenda?

i dont think starbucks understands. if its not a red cup, its not christmas.

Despite the backlash most social media users praised the Unity Cup design.

In September Mr Schultz – who also founded the multi-billion-dollar coffee franchise – endorsed Mrs Clinton as president of the US.

“I think it’s obvious Hillary Clinton needs to be the next president,” the self-professed lifelong Democrat told CNN.

He has only ever donated money to Democratic politicians other than making one donation to Republican John McCain in the late 1990s, according to the Centre for Responsive Politics.