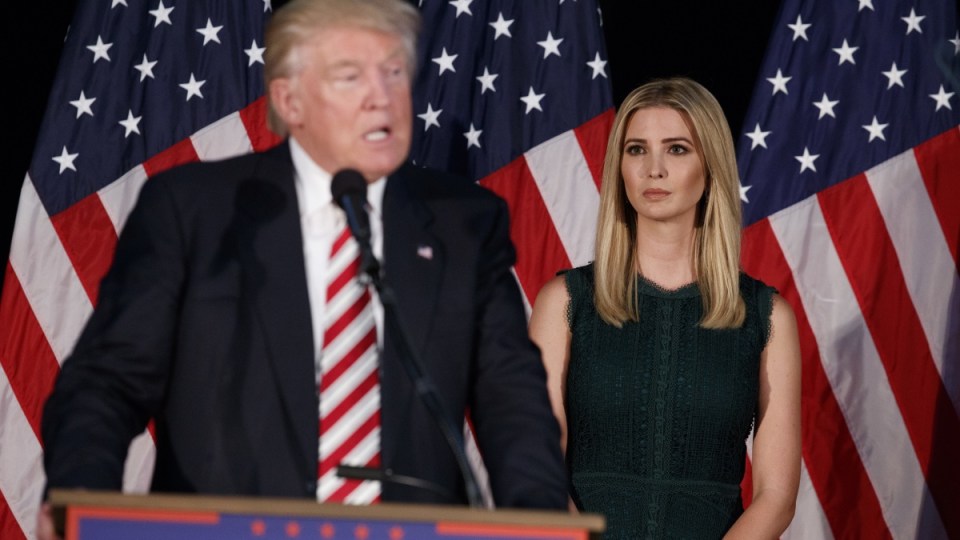 As Donald Trump’s latest polling numbers prompt bleak confessions from close sidekicks, his children are being tarnished by the rampant public disdain aimed toward the billionaire.

It is being encouraged by those furious with Ivanka, 34, for continuing to support Mr Trump while she runs a business based on female empowerment.

Over the past three weeks Mr Trump has been beset by controversies surrounding his treatment of women, the latest accusation coming Sunday (AEDT) from actress Salma Hayek.

Then on Monday, Mr Trump’s campaign manager Kellyanne Conway admitted to NBC “we are behind, she [Hillary Clinton] has some advantages”.

Mr Trump trails Democratic nominee Mrs Clinton by 6.2 per cent as the November 8 election looms, the latest The New York Times “poll of the polls” showed.

Meanwhile, Mrs Clinton’s spokespeople had to bat away questions on whether the White House race had already been won by the veteran politician.

How Ivanka is losing customers

Ivanka Trump’s brand is being damaged by her father’s tumultuous and scandalous campaign. 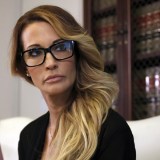 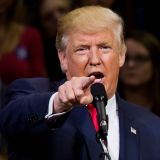 The Ivanka Trump brand and website aims to be “the ultimate destination for #WomenWhoWork with content designed to inspire & empower women working, at all aspects of their lives”.

But thousands of people have posted to social media to encourage the boycott as Ivanka continues to support her father.

My daughter saw a dress she liked. Find something else, I said. We are not buying anything with the name Trump on it! #GrabyourWallets https://t.co/kxPT8BdYff

Ivanka Trump is the top surrogate of campaign to elect Donald Trump president of the United States of America and EVP of Trump Organization. https://t.co/ibC0NiNJKC

The #GrabYourWallets hashtag is a play on the controversial video’s most shocking line, where Mr Trump boasted he was so famous he could “grab them [any woman] by the pussy”.

It’s not the first time Mr Trump’s actions have hurt his daughter’s business. Earlier in the campaign Ivanka’s products being sold on Mr Trump’s website were pulled after it emerged they were made in China.

Regarding China and its economic effect on the US, Mr Trump has said: “We can’t continue to allow China to rape our country, and that’s what they’re doing.”

Other woes for the Trump children

Another of Mr Trump’s five children, Eric Trump, 32, has also been made to look a bit of a fool by his father’s detractors.

Controversy over a possible Eric Trump “lemonade heist” erupted when a photo posted to Twitter showed the billionaire’s son drinking what appeared to be soda from a “free water” cup.

At famous American burger chain In-N-Out – where the photo was taken after the third presidential debate on Wednesday – a penny-pinching tip is to ask for a “free water in a plastic cup” but then fill the cup with soda at the refill station.

Did the wealthy Eric Trump commit the social faux pas? You be the judge:

this is a photo of my homey grant with trumps kid at in-n-out & trumps kid is drinking lemonade outta the free water cup… pic.twitter.com/Npuqte5e2b

The next day at one of his father’s rallies, Eric was made to look silly again when he unknowingly posed with a woman wearing a t-shirt that read in Spanish “Latina contra Trump”.

In English that means: “Latina against Trump”. Eric’s father has made numerous inflammatory comments toward Mexicans in and outside of the US during the campaign.

When you protest a Trump rally but no one realizes your shirt says "Latinas AGAINST trump" so they take pics w/ you like you're supporters pic.twitter.com/5ce8SZw5Mh

How Donald Trump’s campaign is hurting his children’s future