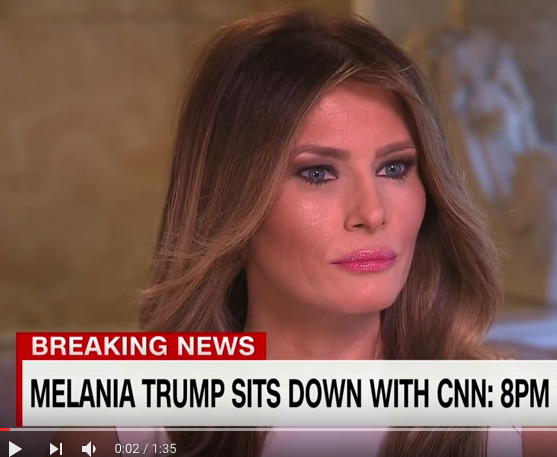 Melania Trump has spoken to CNN about the leaked tape from 2005 which threw her husband’s election campaign into disarray, saying his comments about women were unacceptable, but that he had been “egged on” by television host Billy Bush.

It is the first time that Donald Trump’s wife has spoken on camera about the infamous comments.

In the tape released by The Washington Post on October 7, Mr Trump tells Mr Bush that “you can do anything” to women when you are a star.

The Republican nominee for president also talks about his pursuit of a woman: “I did try and f**k her. She was married.”

In an exclusive interview with CNN’s Anderson Cooper, Ms Trump said this was how she responded to her husband:

“I said to my husband that the language was inappropriate. It’s not acceptable. And I was surprised, because that is not the man that I know.”

Mrs Trump suggested that the off-camera comments were meant to be private:

“As you can see from the tape, the cameras were not on — it was only a mic. And I wonder if they even knew that the mic was on.”

She said the taped conversation was “boy talk” and that her husband had been “led on — like, egged on — from the host to say dirty and bad stuff”. Mrs Trump said she had not heard Donald speak in this way before.

She also said she was not surprised the tape was released in the way it was by media who only want to “bash” her husband:

“Many people from the opposite side, they want to damage the campaign. And why now? Why after so many years, why three weeks before the election?”

It was confirmed this morning that Mr Bush, who at the time of the recording was the host of NBC’s Access Hollywood, had been fired by the network from his job on the Today show.

Since the tape was released, Mr Trump has faced accusations from women that he inappropriately kissed or touched them. He denies any sexual misconduct.

When asked if she believed her husband that these women were lying, she said she did. She said to bring forward allegations of sexual assault without evidence is “damaging and unfair”, and that any allegations should be dealt with by courts.

Mr Trump has also suggested that the election is rigged against him, but senior Republicans have rebuked this.

He was ‘egged on’: Melania breaks silence on sex tapes