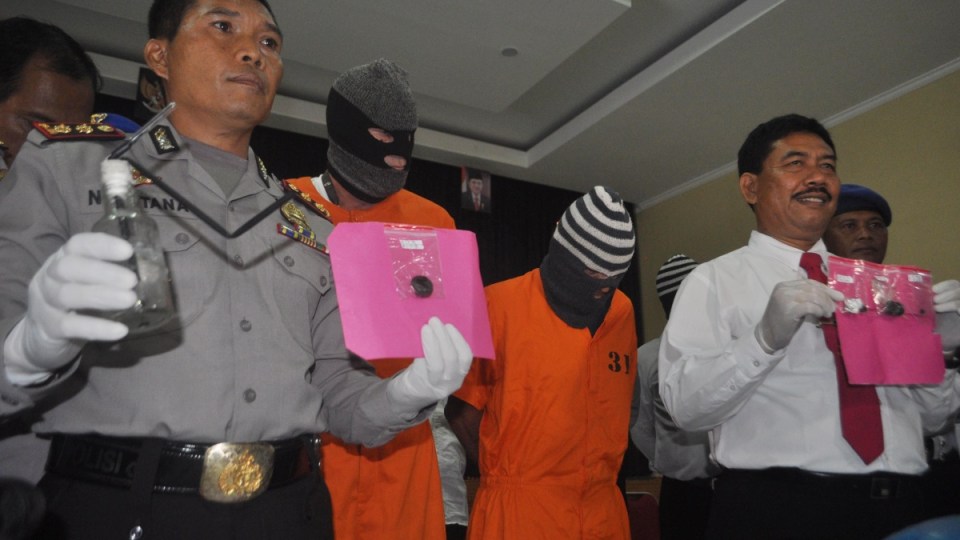 An Australian cafe owner, a former British journalist, a member of the military and a police officer.

Over three days in Bali, local officers have been adding to the list of accused as they follow the alleged supply of hashish and ice in the popular seaside town of Sanur.

Australian man Giuseppe Serafino, 48, and former Reuters bureau chief, 54-year-old British man David Fox, covered their face with balaclavas when they were paraded in front of media at Denpasar police station on Monday.

Serafino, from Western Australia, is a cafe owner in Bali who is believed to have been living in Sanur for the past five years.

He told police he began using hashish as an appetite stimulant and pain relief following a cancer diagnosis eight years ago.

Australian man, 48, arrested in Bali on suspicion of drug use

His “friend” Fox, meanwhile, was a former bureau chief for the news wire Reuters.

According to his LinkedIn profile, “after two decades as a frontline reporter, editor, bureau chief and senior country officer for Thomson Reuters I have swapped the bunkers of conflicts for the more sedate bunkers of some of Asia’s finest golf courses”.

Fox, who has been living in Bali on a business visa, has allegedly told police he has purchased the drug at least five times over the past eight months, usually for around three million rupiah ($A300) – from a British man known only as GR.

“(Fox) has used hashish for the past 30 years, since his assignment as a journalist covering conflict in Somalia,” said Gede Ganefo, head of the drugs squad at Denpasar Police Station.

“His intention was to relieve stress.”

Both men were arrested on Saturday after police went to Serafino’s home where they allegedly found less than 10 grams of hashish in a small pouch.

Upon his arrest, police allege he told them Fox had given him the drug.

Police pressed him to organise a meet at the nearby On On Bar where they arrested Fox before taking the former journalist back to his home where they allegedly discovered about 10 grams of hashish there – hidden inside a blue boxing glove.

Serafino, police said, has since implicated a member of the military, F, who in turn gave up the local police officer, K.

“Whether GS (Serafino) is only a user or also involved in the circulation, we’re still investigating it,” Deputy Chief Artana said.

Police allege F and K were also supplying sabu or “ice” to other people in Bali.

Police believe Serafino and Fox will be charged with the possession of more than five grams of drugs.

The offence carries a maximum penalty of 20 years with a fine of up to eight billion rupiah ($A800,000).