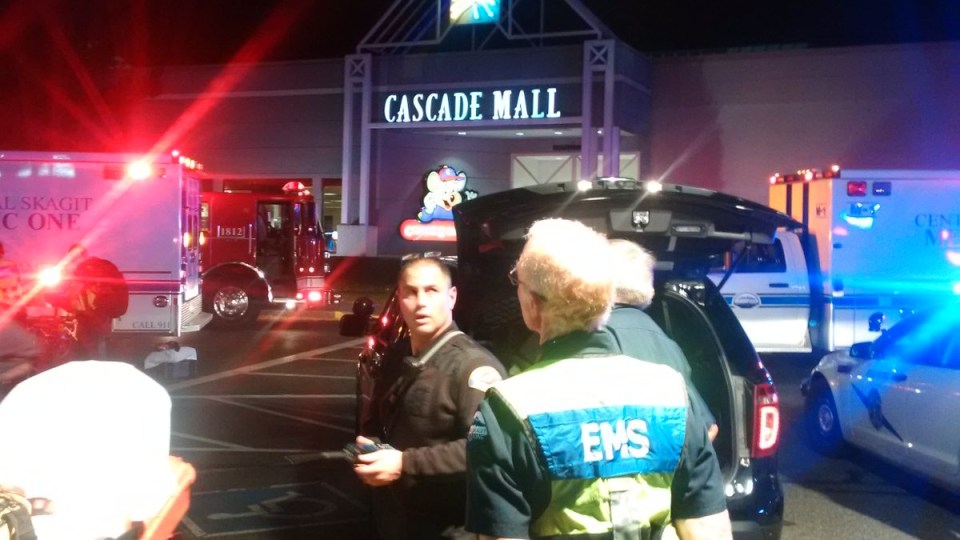 Police say they have captured the man they allege killed five people during a shooting at a mall in the US state of Washington.

Four women were killed and one man who suffered life-threatening injuries was taken to hospital where he later died during the incident at Cascade Mall in Burlington.

Police had been hunting the suspect since the incident on Friday night.

The gunman allegedly opened fire with a rifle in the mall before disappearing under the cover of darkness.

The suspect entered the Cascade Mall in Burlington, around 105km north of Seattle, and began shooting about 7pm local time on Friday in the cosmetics section of a Macy’s department store.

The suspect, who police described on Twitter as an Hispanic male, initially walked into the shopping centre without the rifle but surveillance video later caught him brandishing the weapon, said Lt. Chris Cammock of the Mount Vernon Police Department at a briefing on Saturday.

The rifle was later recovered at the mall, said Cammock, who is commander of the Skagit County Multi-Agency Response Team.

None of the victims was identified.

Steve Sexton, the mayor of Burlington, described the shooting as a “senseless act”.

“It was the world knocking on our doorstep and it came to our little community here,” he said before acknowledging the response by law enforcement.

“I know now our support goes with them to bring this son of a bitch to justice.”

Authorities offered no information about a possible motive for the attack, which followed a series of violent outbursts at shopping centres across the US, including the stabbing of nine people at a Minnesota centre last weekend.

“We have no indication that we have a terrorism act,” said Michael Knutson, assistant special agent in charge of the Federal Bureau of Investigation’s Seattle office.

“I can’t discount that, but I can’t conclude it either.”

After the shooting, police and rescue workers worked their way through the mall, clearing stores and evacuating shoppers, some of whom locked themselves in dressing rooms.

The mall remained closed on Saturday as investigators sifted for evidence and attempted to recreate the crime scene.

Authorities released a grainy photo of the suspect taken by a surveillance camera.

It shows a young male in his late teens or mid-20s with short dark hair, dressed in dark shorts and T-shirt and carrying a rifle.

Local authorities searched through the night for the gunman and warned residents to remain indoors, though later said the area was safe.

Stephanie Bose, an assistant general manager at Johnny Carino’s Italian restaurant near the Macy’s store at the mall, said she immediately locked the doors to the restaurant after hearing about the shooting from an employee’s boyfriend.

“He was trying to go to the mall and people were screaming,” she said. “It was frantic.”

She said he could see police at the doors with assault rifles and said they were no longer guarding the doors as of 9.30pm.

‘Bring this son of a bitch to justice’: police nab suspect