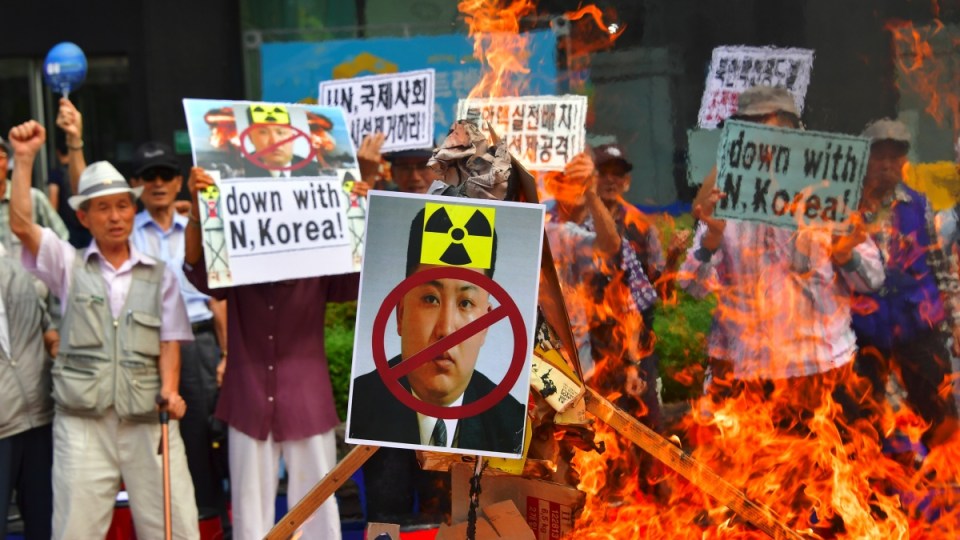 International leaders have condemned North Korea after the rogue nation conducted its fifth and most powerful nuclear test on Friday despite strict sanctions.

On what was a national holiday in Pyongyang for the 68th anniversary of the nation’s founding, state media announced the detonation of a “higher level” nuclear warhead.

The United Nations Security Council held an urgent meeting on Friday to work on a new set of sanctions for what Japanese spokesman Yoshihide Suga labelled the “neighbourhood outlaw”.

How big was the bomb?

North Korean state media said the test allowed for the further development of “a variety of smaller, lighter and diversified nuclear warheads of higher strike power”.

“This has definitely put on a higher level … DPRK’S technology of mounting nuclear warheads on ballistic rockets,” the KCNA official news agency said.

South Korea estimated the power of the device detonated to be around 10 kilotonnes, or 10,000 tonnes of TNT.

As a comparison, the nuclear bomb the United States dropped on Hiroshima had a blast yield of 15,000 tonnes.

The test is a reaction to tighter restrictions imposed by the international community following North Korea’s four earlier tests in January and February this year.

Will China step in?

“We will be seeking China’s response to this. China is an influence in North Korea and China has a special role to play given its proximity to the North Korean regime,” Ms Bishop said.

“While North Korea is testing nuclear weapons and carrying out these nuclear tests, their people are suffering.”

Beijing on Friday said it “firmly opposes” the test.

However, Beijing is unlikely to act due to fears a collapse of the North Korean regime could lead to an influx of refugees to its borders.

Furthermore, a unified Korean peninsula would likely fall under the existing Seoul government, meaning it would be an ally to the United States – a strategic setback for China.

Meanwhile, US presidential candidate Donald Trump seized on the test as an opportunity to take a jab at opponent Hillary Clinton.

“Just today we were reminded of the need for missile defense after North Korea performed its fourth nuclear test since Hillary Clinton became Secretary of State,” Mr Trump said.

“Hillary Clinton has presided over the greatest series of foreign policy failures and blunders anyone has ever seen. Her policies have produced massive global disorder.”

Do you support your husband's 1994 nuclear deal with North Korea?

“This constitutes a direct threat to the United States, and we cannot and will never accept this,” she said.